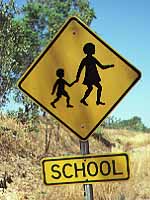 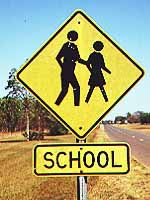 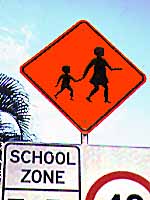 The Australian warning signs for children on the road belong to the UK-group of roadsigns:

The shape of the panel deviates from the mother-country. The diamond says new world or Ireland. The drawing however is very much UK-group.

The 'Berry Spring' type sign is most wide-spread. Some signs come with a red background colour —normally used for temporary signage— and sometimes the message is brought by a pedestrian sign. Could the proper sign have been out-of-stock? Or is it an indication of the level of education provided?

Take note that the man takes over from the girl when they reach adulthood. (A similar case in Egypt.) 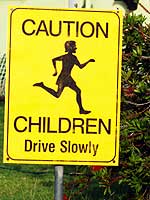 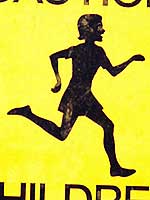 The drawing is much better than on the other finds. Notice that the girl wears a dress with short sleeves. 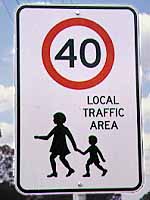 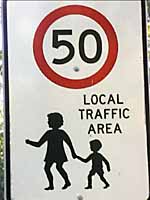 New South Wales;
pict. H. Scruby
An all-in-one type sign is often used in urban zones. The drawing of the children is mirrored and now erroneously suggests right-hand driving. There is no consensus about the speed limit.

Visit the Pedestrian Council of Australia

Speed limit in some other countries:

It is probably this kind of roadsigns that caught the eye of Bill Bryson when he was in Australia.

Falling rocks also manage to make their way into the printed world. Read M. Amis in Italy and V.S. Naipaul on the home page.

… I dumped my stuff and walked into town through the baking end-of-day heat. Now I saw the 1950s everywhere. Even the Children Crossing signs in Australia, I noticed, show kids in 1950s attire – a little girl in a party dress, a boy in short pants, like Dick and Jane in silhouette. …
(In a sunburned country – Bill Bryson, 2000)
Path: Home / Country list / Children's Crossings worldwide / in Australia
e-mail:
More roadsigns from Australia: Men at Work - Falling Rock Signs