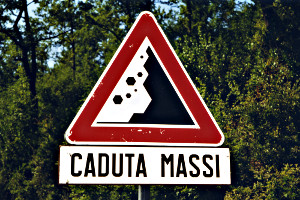 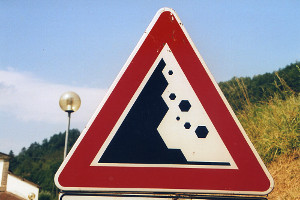 Toscany, VI.2006; pict. H. De Meyer
The modern sign on mainland Italy, Sardinia and Sicily is as dull as a sign can be. This find, however, is nevertheless most interesting for the more educated visitor. 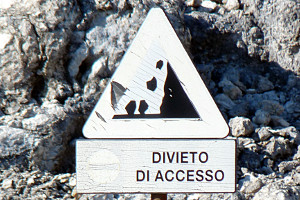 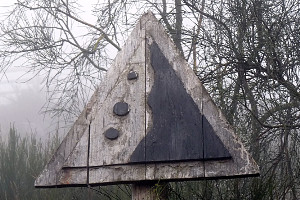 Vesuvius, 15.IV.2014; pict. H. De Meyer
This very nice wooden sign features a design that is nowhere else to be found. 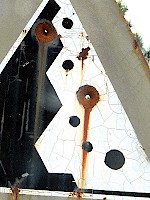 Vesuvius, 24.IV.2014;
pict. A. Guët
A sign found along the same road as the previous one. The sign was spotted from the bus on the way up to the Vesuvius and our man asked the driver to stop on the way back to Ercolano.

Notice that this is not the regular Italian Falling Rock Sign with hexagonal boulders. On this fine specimen, the boulders are round ! Our people in the field have a very sharp eye, indeed.