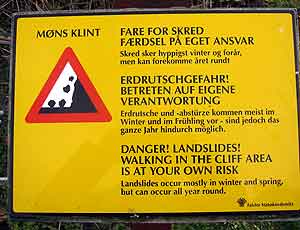 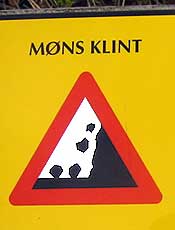 Iceland
The main sight on the island of Møn is Møn's Klint, 5 000-year-old chalk cliffs which drop more than hunderd meters into the sea and are a major tourist attraction for Danes and foreigners alike. It's presumably also the only spot in Denmark with a falling rock sign. But that was no impediment for our man in the field. I'll tell you : what our spotters are not able to dig up is not there.

We knew already that Denmark and the Faeroe Islands carry the same line of Men at Work and Children's Crossing signs and the similarity of the Falling Rock signs is therefore hardly a surprise.

Before this find, my theory was that all rock-signs of Faeroe were imported from countries like Iceland and Norway. Now, however, we must count with two (3 says our watchguard) possible scenarios: Who shall tell ?

Did you notice that the boulders landed on their tip and managed to stay upright?
Quite a performance. It is even more outspoken in Faeroe !