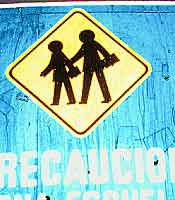 These children have to endure the very same educational methods which we commented in Costa Rica. The metho­dology is clearly winning popularity. The same design (the same posture, the exagerated brains) is now found in South-America all over. 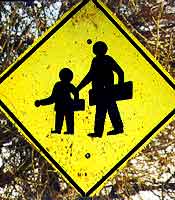 Take a closer look at the right person's suitcase. Did you notice? It's not a bookbag. This man is carrying a plank — It may even be the school's blackboard? And he must be very strong, because he manages the thing with one arm only. 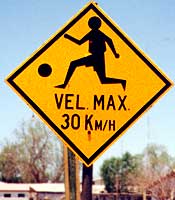 A refreshing scene in comparison with the static of the other panels. It's interesting to take a look at the drawing of a similar situation in Ontario - Canada. The boy there is chasing the dot. Our player here is much more at ease.

Our page about Australia gives a short overview of the allowed speed in other countries. 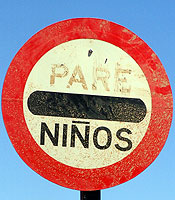 We had already Falling Rock Signs without a rock. And now we have a text-only Children's Crossing Sign also. The text says Halt - Children.