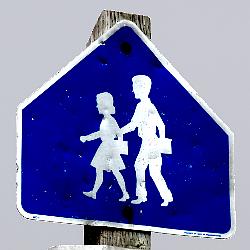 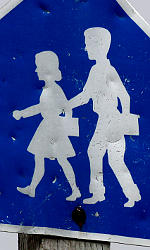 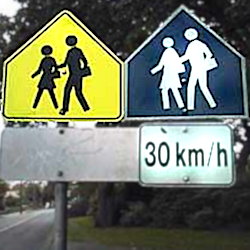 Alas this kind is to be seen almost nowhere anymore because they are replaced by the modern designs which presumably are more distinctive. Regular readers of the site know it's the bleak fate of all those sweet old fashioned signs.

The yellow traffic sign warns for a crossing ahead. The blue twin sign indicates a school. Both are uninspired copies of the flat US signs. Could be the other way round of course.

Speed limits vary widely between countries (Madagaskar 20 km, 30 in The Gambia, 90 in Belgium): summary table in Australia. Canada is on the safe side but it is not always easy to know what the maximum speed is at a given time. Quebec, at noon on Ascension Day, what do you think? Is 30 the limit? Or not? 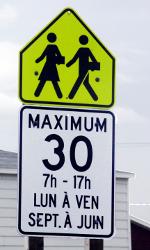 The head, as always, hovers above the body, but sometimes there is a neck providing a safe landing place should it need a rest.

The line at the bottom may be dashed or not. The latter is much safer. I wouldn't want to stumble in the middle of the road.

The modern sign for a school zone is not worth much either. The older drawings show people slanting forward in a natural walking posture; this behaviour is gone in the new produce.

Both sexes are equally tall: both heads are on the same level. Equal rights preachers shouldn't cry victory, though, because male dominance is now back in another sneaky way. I, for my part, do not believe that the white pin-stripe along the leg is a production artifact and only that. Do You? Did you notice the pose in old and new signs? The new sign shows a stiff carriage which styles very well with the trousers. It is a clear example of Power display. 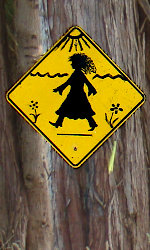 Firstly we have the nice, lively drawings of children like the one at Malcolm Island or the one from Toronto.

Then we see the strange crea­tures who bounce a ball. Or maybe they are hunting for the head of one of their friends who has lost it?

We end up with signs where the children have lost all con­nection with the real world and look more like spinning top toys than people.