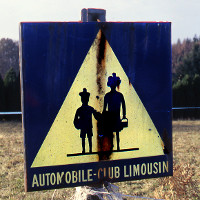 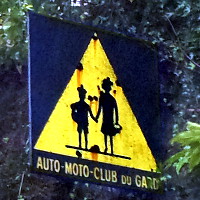 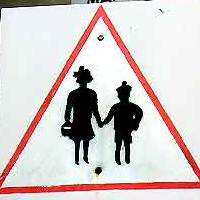 Pernes-les-fontaines (Vaucluse), VII.2002;
pict. C. Vanhercke
The top rows show the good-old-school type of signs warning drivers that a school is nearby. The design appeared in the early 1930s and lasted until after the second World War.

It is basically a yellow triangle drawn inside a dark blue square. Two people occupy the triangle. They walk along the road and don't show any intention to cross over to the other side. We see them from behind and not from aside like in the more modern type of signs (†).

Notice the variation in the implementation. A mother (or older sister) accompanies a boy wearing shorts. Sometimes it's a girl (‡) who's brought to school. The person in charge carries a basket, a bookbag or a purse. The child brings a bookbag or nothing. Both may come bareheaded but it happens that the boy wears kind of a beret, or a tammy with pompon.

The most peculiar feature is that the pedestrians do not walk above or on but in the baseline. The pavement softly retracts and delicately molds around the young feet. 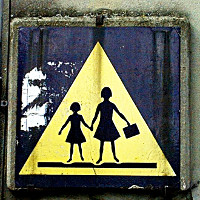 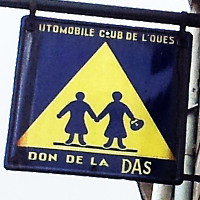 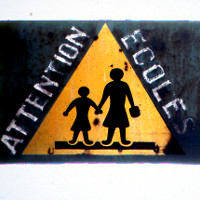 Narbonne, V.2003;
pict. Baeten & De Dier
In France — and in some countries having strong relations with it (e.g. Madagascar) — Children's Crossing Signs were often donated. Automobile–club Limousin, Auto–Moto–Club du Gard, Automobile club du Nord de la France (since 1900), Automo­bile Club de l'Ouest (since 1906) have a long history and are still very much alive today.
The sign found in Bernay is most interesting. It mentions la DAS which stands for Défense Automobile et Sportive. D.A.S. was a fund meant to provide roadvictims with legal protection support. The founder was George Durand who was also foun­der of the Club Automobile de l'Ouest and of the 24 Hours of Le Mans. 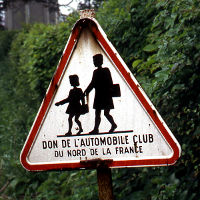 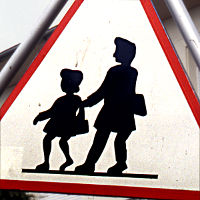 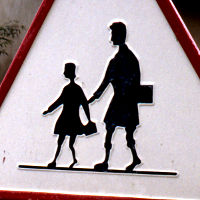 Adour, V.1995
After the war government took over and, although sponsoring was still possible, the name of the donateur was banned to the backside, taking away any incentive. New signs were trian­gular with a red border.

The scene changed entirely. We have now a boy and a girl shown en profil. They both carry a bookbag and wear a coat. That is particularly clear when we look at the boys wearing short pants and sports socks.

Notice that there is still quite some variation in the drawing. Their posture and BMI vary widely. The boy sometimes prefers long pants. A second boy may replace the girl.

The implementation as a rule shows much more detail than today's produce, but the quality ranges between very good and rather sloppy. That is most visible in the faces and in the haircut, which is typical. Other countries (e.g. Spain, Belgium) have their own hairstyle too. Monsieur Jean will gladly show you around. 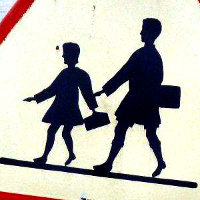 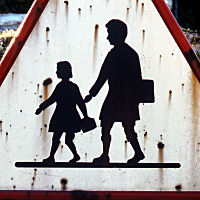 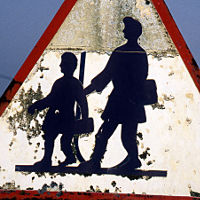 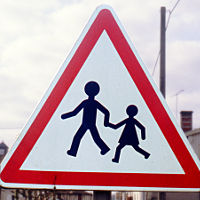 From the 1970s on, the nice, sweet roadsigns of old were rapidly replaced by the now omnipresent modern tasteless design where the French youth has lost its face and identity. What is the point of fighting for recognition if you let your identity be taken away from and by your roadsigns.

This design (?) is taking over in many other countries (e.g. Senegal, Mali, Morocco, The Azores, and more). The world will soon be flat again. 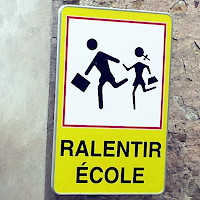 Things are rapidly going downhill in France. In addition to their own modern design, we are now also seeing the modern Mediterranean warning sign popping up — see Malta for a discussion of this group of roadsigns.

Notice that on old Crossing Signs the girl is guided by the boy. In the modern breed she is dragged. This swap occurs in almost all countries during the conversion from old into new. 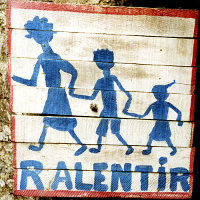 This is the kind of signs that makes our efforts on the field worthwhile. The sky turns blue, the birds start singing, and the burden of the camera is forgotten. This is what we do it for.

Trios are rare and so is the support of this painting. 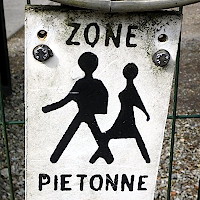 Because of the text —zone piétone or pedestrian zone— we know that this is not meant as a warning sign for a Children's Crossing. However, the drawing has a certain charm and therefore, in my opinion, the panel merits inclusion on this page.

† We have found a similar approach in Belize (mother with offspring) and in Hungary (father).
‡ Like I said in Argentina the sex of children wearing a dust cloak is difficult to determine.
Path: Home / Country List / Children in depth / Children's Crossing Signs in France
e-mail:
More roadsigns from France: Men at work - Falling Rock Signs