VII.1998; pict. T. Defoort
Our first sign is remarkable in some ways.
⦿ First because of the heads inflated with knowledge. Hunga­rian children may very well be able to survive a few days wit­hout Google. While stocking up on facts and know­ledge is healthy in my opinion, some countries are driving it too far: e.g. Costa Rica and Indonesia. The Hungarian educational system, however, seems to have found kind of a reasonable situation.
⦿ Secondly the girl is the taller person and she is showing the way. That is custom in countries belonging to the UK-group (e.g. South-Africa, Great Britain) but normally not seen on the European continent.
⦿ Thirdly the pupils forgot their bookbags. That also is rather unusual on older Children's Crossing Signs. 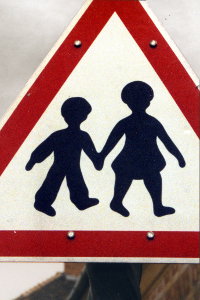 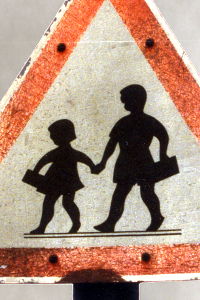 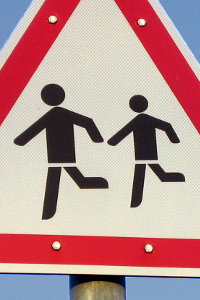 Nemeskie, 3.IV.2012; pict. J. Breine
Our second sign is far less common than the first. Its style is also much more continental. The boy is taller than the girl. He is walking in shorts —you did notice the trousers (†) in the first find, did you? Both carry a bookbag.

There is one peculiarity though: the double stroke below their feet. A stroke representing the pavement is shown in many countries (e.g. Belgium, The Azores, Romania). It is always a single, sometimes heavy, stroke.

Hungary became a full member of the European Union in May 2004. Its membership has reportedly had a positive impact on its economy and many things more. The effects on its road­signs, however, can only be seen as disastrous.

The sweet old-fashioned signs are gradually replaced by ugly, characterless, modern iconized drawings. There is no mercy, not even for the nice drawing of a father spending quality time with his daughter. It is probably considered sus­picious, nowadays in our age of distrust. 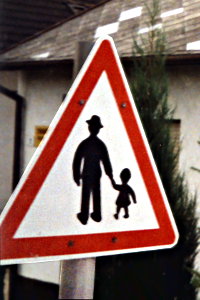 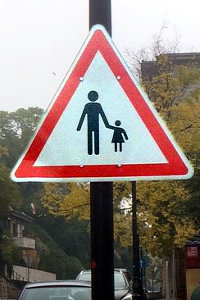 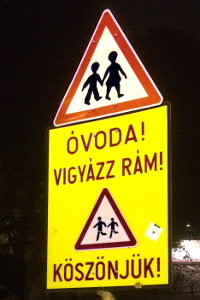 Budapest, X.2015; pict. P. T'Jollijn
Óvoda = Kindergarten
Other countries where a father with child is shown: Israel, Madagascar. In Laos father and mother take turns in walking their child and in Belize a mother with two children can be seen.
Often the roadsigns are included in larger panels. The kindergarten warning includes both, old and new design together. 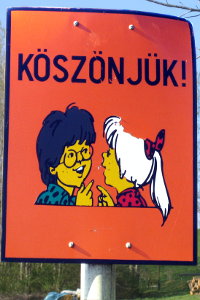 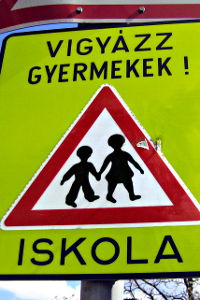 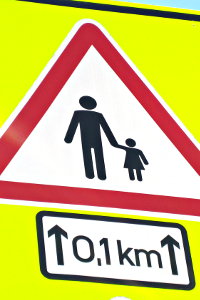 †  Isn't it remarkable? In the sign were the girl is the person in command the boy is wearing long trousers, while were he is in charge, he changes into shorts.