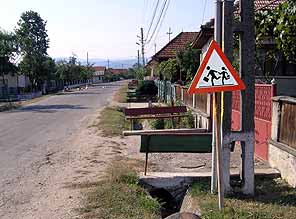 Godines (prov. Gorj), VII.2007; pict. De Knijf & Demolder
We have now several samples from Romania and the situation doesn't look very comforting for us roadsign collecting people. All panels in good shape are drawn in the modern sketchy way. Gone are the old fashioned signs.

Let's take a look at the Sintana and Maramures finds. They must belong amongst the ugliest on the global market. A junior road­sign research assistant would very well classify them with the UK-group of signs. A quick look at Great-Britain's page reveals that this can't be correct. 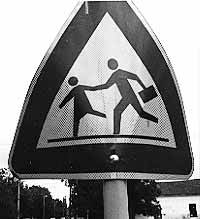 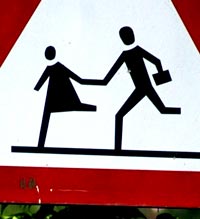 Notice the shape of the head. It is a feature also found amongst the workmen. 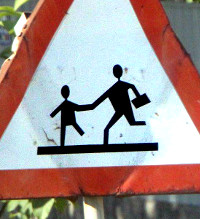 Notice the improvement: the head is connected. 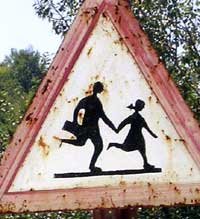 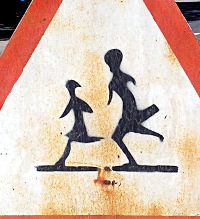 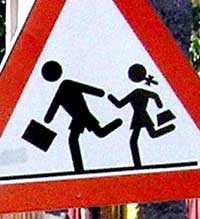 Godines (prov. Gorj), 17.VII.2007;
pict. De Knijf & Demolder
The find from Titerlesti is most likely the precursor of the more modern designs. We see basically the same scene but mirorred and that's exactly what usually happens when an older design is modernized.
The Godines sign is similar to the modern kind found in many countries around the Mediterranean Sea (See Malta). It kept a primitive feature in the horizontal stroke, however. This line was present in the older designs and it was preserved in the new drawing. 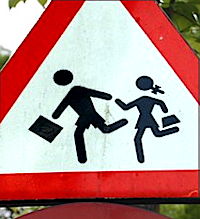