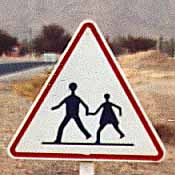 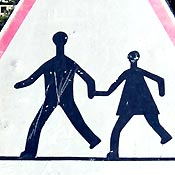 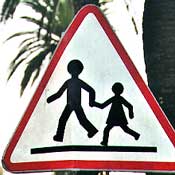 Rabat, 8.X.2005; pict. H. De Meyer
L'administration française strikes again, was my first reaction. But I was wrong. Several countries under French influence (e.g. Senegal, Mali) swallow the modern French children's sign unchanged indeed, but Morocco breeds a kind of their own.
Let's have a closer look:
+ The children are a bit fatter than in France; that is probably not entirely true to fact.
+ The body proportions are a trifle weird: the underarms are far too short and the neck is surprisingly long.

France
+ The children aren't walking like in France. They are rather pivoting around one of the legs.
+ There is a bottom-line present.

The find from Rabat suggests a shift towards the French design —a collector's nightmare. The bottomline is kept in place, however, and this makes the boy hover above the ground. Drawing the line higher was probably not an option because that would have cut the girl's legs. 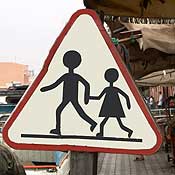 Amtoudi-Tafraout, 31.III.2010; pict. J. Breine
The silly jumping and pivoting is over. We're looking at a normal walk. Though not at normal people. Look at the head which is as wide as the shoulders and filled to the brim with knowledge. That reminds me of Costa Rica.
Painted on a wall and far more realistic than any of the official signs.
Path: Home / Country list / Children's Crossing Signs worldwide / Signs in Morocco
e-mail:
More roadsigns from Morocco: Men at work - Falling Rock Signs