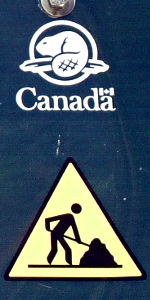 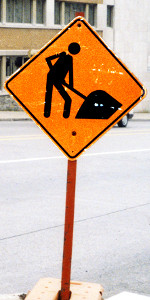 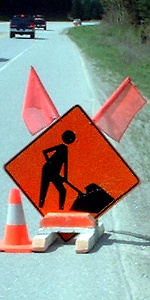 Our sample is small, but that should not keep us from assigning meaning to our observations: Canada runs two lines of warning signs for men at work.

Signs in the National Parks are of the European type: trian­gular with yellow background. The heap has a shape which could exist in the real world. The park's worker is very con­scious of his impact on the environment and tries to reduce his ecological footprint by tiptoeing.

The other roadsigns are very much inspired by the American kind. Canadians, however, have a keen eye and improve­ments were tried in the impossible cutout in the heap.

The designer from British Columbia got it almost right and we may believe that under some circumstances the bite from the heap may have the shape shown. His colleague from Québec played it safe and removed the cutout altogether. Smart.