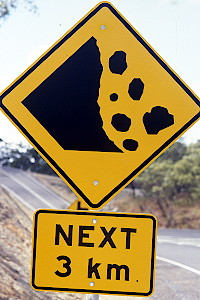 Mt Molloy -> Lakeland, 22.vii.2001
We had more than 4000 km under the wheels and only now, from Mount Isa heading for Hughenden, came the first rock roadsign in sight. Guess what? We couldn't stop safely! It was a black day barely soothed by the knowledge that having been in Mount Isa we were now real Aussies.

Twitchers are familiar with the feeling.
You are driving for miles and miles and miles to mark this most exquisite Common Honey Pepper on your life list and when you arrive you learn from other people walking on clouds that the stupid animal just flew off for Siberia the night before.

The next days were like hell. I knew there was a sign; I even knew an exact spot; and for days on row no new specimen emerged on the horizon.

Imagine the sweet feeling when we eventually came across a second sign. I instantly fell in love with all worlds' creatures. That evening we spoiled our­selves with a good sparkling wine (French visitors would complain if I wrote Champagne). 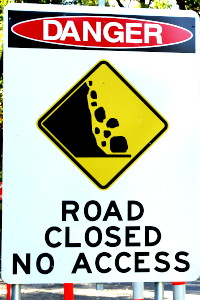 Victoria, 03.i.2013; pict. Baeten & De Dier
The warning signs with six boulders are very similar to falling rock signs found in New Zealand and aren't reported yet from any other country.

The next panel, counting nine boulders, looks very much like signs of the UK-group (see Great Britain). Team members will immediately spot the difference though. There is one additional stone in the middle. 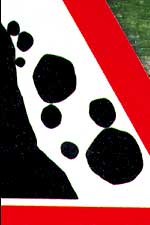 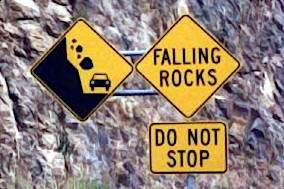 near Windemere Dam (NSW); viii.2002; pict. L. Sims
NSW authorities don't want to take any risk.
+ They mount a drawing illustrating the dangerous event.
+ Then write down what to watch out for.
+ Finally suggest the appropriate behaviour.
Only to make sure that the message reaches everybody.

Rock warning signs with vehicles are not very common. Most are found in both the Americas : f.e. Argentina, Mexico, Ecuador, and the U.S.A. where one panel shows a direct hit. 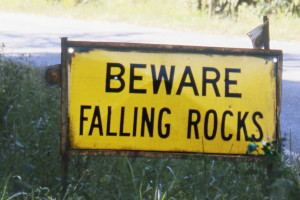