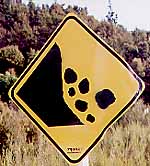 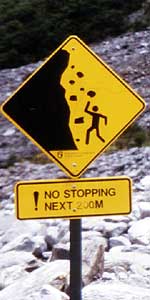 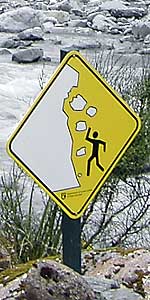 Fox Glacier (S.-Isl.), III.2007;
pict. S. Coenen
Of all signs, the Falling Rocks Signs are the most Australian of New Zealand's warning signs at this site.

The size of the boulders is rather big and the position of the individual stones is not exactly what I expect. I would think that the larger stones fall closer to the wall than the pebbles.

Notice also that New Zealand shows a later stage in the action than Australia: the boulders are closer to the ground.

Next a couple of remarkable road signs. They are peculiar because they feature a man. Rock signs normally exclusively show rocks and in a rare case also cars (e.g. Argentina, U.S. of A.). It is only in China that we've found another sign with rocks hitting a person.

I'm not sure that I can read their message nor that their meaning is the same. Are we looking at a warning (†) 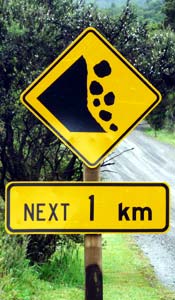 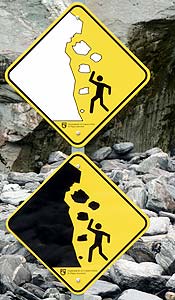 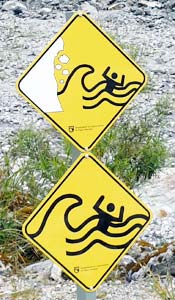 Fox Glacier, 30.XI.2009
pict. Van Herck & Demarest
New finds confirm New Zealand as a country with peculiar roadsigns. The find at hand looks like it's mounted upside down. But it doesn't look any more natural after a 180° rotation (see below). It is probably mounted like it is supposed to be — compare the wall with the other finds. Hardly credible.

I strongly suggest that the country's roadsign engineers take a look outside once in a while. It's perhaps an idea for a team building excursion to a real cliff? And may they focus on the trajectory of the rocks. 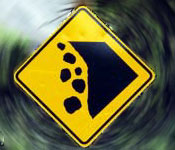 The Glacier Collection has become quite something. Shouldn't we start a small discussion group about the peculiarities of the design or about the exact meaning? It could be a nice diver­sion for a bleak winterday.

Add to the thoughts earlier on this page:
° Why is it so important to show a person on every sign?
° Why is the man not white on the black version?
° Is it a warning not to swim too near to the cliff?
° Or perhaps to take care not to be swept away by water thrown up by falling ice?
° Or a warning for freak waves?
° Notice that the configuration of the rocks above water is different: the second stone is closer to the wall; on terra firma this one is more out and heading for the person.

(†) Please note that our team only took a picture of the face of the warning sign and that their vehicle was halted in front of it — No walking or stopping over the line. Safety comes first, says our team bible.
Path: Home / Country list / Rocks in depth / Rocks in New Zealand
e-mail:
More roadsigns from New Zealand: Men at work - Children's Crossing Signs