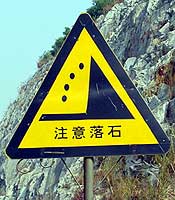 Notice the unnatural path of the rocks on their way down. It looks like they are floating away with the wind. Find another example of this pheno­menon in Iceland.

The text says: zhù yì luò shí or pay attention to falling rocks
(Translation by our man in China RM). 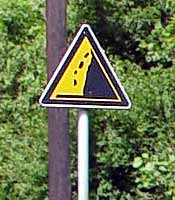 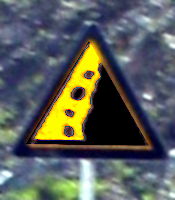 Two of our year 2006 finds are reminding us of the roadsign we've found near Macau. We recognize the same number of stones and notice also a huge improvement in the drawing. The stones now have different shapes and sizes and the path which they are following is much more natural.

The sign found near the Long Wall at Badaling proves that even more variation in the constellation of the rocks can be found. That is good news and it is the country's first find with five boulders (See statistics). Our spotters there are on full alert. 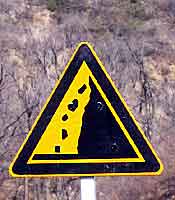 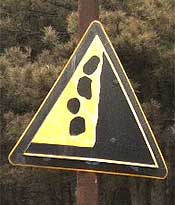 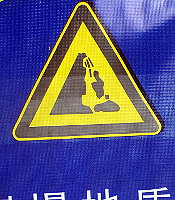 Chengyang, 09.IX.2015;
pict. J. Breine
Our Man in China is a lucky bastard who can spot during working hours. And he is getting results : here a unique specimen which with four huge boulders. The trajectory is more natural than on the other signs from China and the size of the boulders makes this a real warning sign for sure. Nobody wants one of these on his head.
The diversity in Chinese Falling Rock Signs is slowly rising and the number of stones is falling. The two major boulders are probably the largest ever seen on a roadsign: almost half as high as the cliff. Notice also the peculiar shape and the presence of strokes suggestion movement. 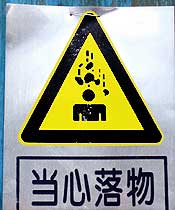 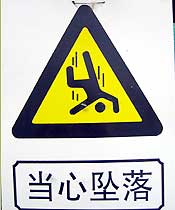 Hanzou, 21.VII.2005;
pict. E. Van Den Bergh
This was found near a temple in obvious need of some repairs. It was only after a while that I managed to read this drawing. The weird thing at the bottom is a torso of a man. Once this is understood it is easy to recognize the head and boulders.

For a long time —My skills don't reach beyond Nĭ Hăo— I have read this as a Falling Rock Sign. Thanks to the transla­tion by R. Mason we now know that objects, not rocks, are mentioned (†). A picture surely may be worth a thou­sand words, but we still need words to resolve ambiguities.

It is not a falling rock sign (‡), I do agree, but my eyes were so badly hit that I thought I should share the feeling. Looking at a find of the Faeroe Islands with exactly the same warning I can only wonder what went wrong with the easterner's apprecia­tion of beauty and good taste.

Shangzhou, Jiangxi Province, 22.X.2018; pict. N. Heerink
In general, it is rather difficult to become ecstatic about Chinese road sign designs, but this find really is something worth the burden of a long distance flight.

A unique specimen featuring a nice rock face. Rocks are falling down and people are threathened by the rain of stones. A dark cloud hovers over the scene and gives the poor people a nasty shower. Marvelous.