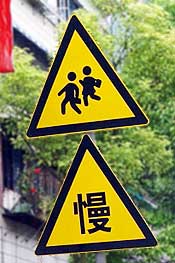 Not exactly a collector's delight but still worth a word or two. 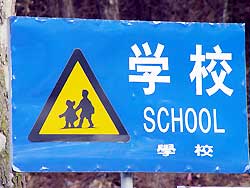 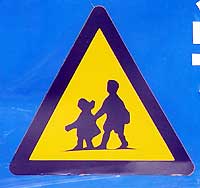 
Our people on the field never sleep. They stay watchful for months on end even after the umpteenth identical roadsign. And it pays, even in China. All children's signs are identical, except for this one. It's comforting to know that at least one small spot escapes party control.

The drawing is almost the same as in — they won't like this — Taiwan. It is European design (e.g. Spain) with a yellow (that is not entirely a surprise) background and a very specific hairdress for the girl.

R. Mason was so kind to provide us with a translation of the captions:

Lushan sign:
+ top = school in the People's Republic simplified script.
+ Bottom repeats school but now in the old script used in Hongkong (notice the same characters in our find at the top of this page) and Taiwan.