Men at Work Signs in China 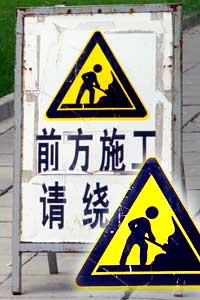 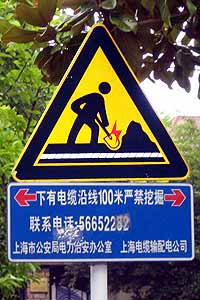 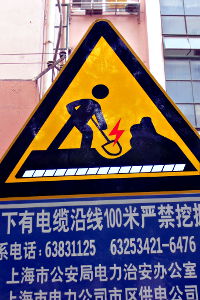 Shanghai, 3.IX.2015;
pict. J. Breine
At least for now Europe seems to have more influence in China than the Americas. All finds be it men, children or rocks, are of the European match-stick design. Let's touch some peculiarities.

Take the panel of Beijing. The heap is very high in propor­tion to the size of the worker (similar to Mali). The earth must be a bit humid otherwise the heap could never exist in this shape.

All the workers on the first row must be new to the job and someone should tell them to rotate the blade of the spade under a more useful angle — Read also Bartolomeo's Best Practices.

Normally the intended recipient of a warning is not shown on the sign itself. So the finds from Shanghai seem to warn us for men on the road with spades in flames (digging too fast?).

If the sign is directed towards workmen telling them not to dig into a cable under the surface then the drawing should not show the man. The target of the message shouldn't be in the picture. And the spade should hit the wire.

Other panels where the dangerous situation is shown with the target of the warning included can be seen in f.e. Finland and Kilkee, Ireland). 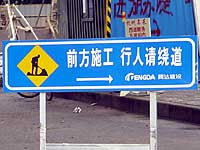 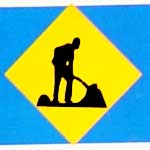 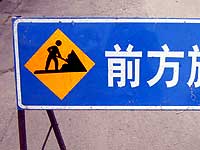 The design from Hanghzou reminds me of similar drawings at several European places. However a shaft giving way under the load isn't seen that often. We have examples from Austria and Svalbard where we could blame the industrious worker or the inclement weather, but I think that in this case we should point to the inferior quality of the tool. 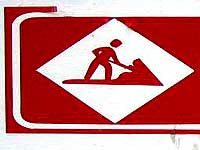 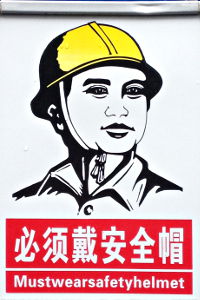 Xian, 04.IX.2015; pict. J. Breine
Though this is not a warning sign for Men at Work, we are happy enough to include it in our pages.

The same guy can be seen in the picture at the top of this page where he is telling us that we should make a detour. Here, however, he is radiating some good solid advice: You must wear your helmet.

It must be that Bartolomeo's Best Practices are gaining ground in China.