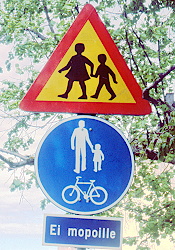 1996
Ei mopoille = not for mopeds
One of the comforting benefits of roadsign collecting used to be that you couldn't get lost once you knew your signs —because they were often country specific.

Some short hints from the team's fieldguide.

But this kind — which is a member of the so called U.K group of signs— is found in Iran, South Africa, Iceland and many other countries. We find them on many places in the northern hemisphere and also well south of the equator.

The widespread use makes this type of roadsigns close to useless as a localisation tool. Globalisation is hitting us again. 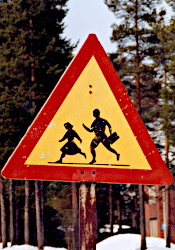 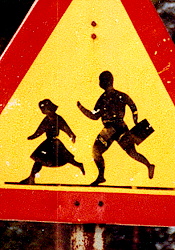 The children do not hold hands. They are running, not walking. The boy is tallest and carries a bookbag.

We have more or less similar signs from e.g. Iran, The Netherlands and Italy but none is exactly the same.

Two countries, however, do display matching roadsigns: Switzerland and Syria. 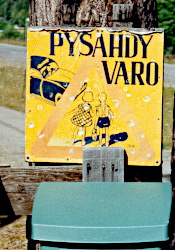 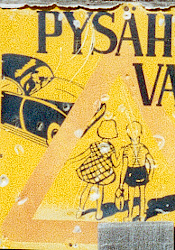 Vuotso - Sodankylä (Lapland); 14.vii.2001; pict. V. Väisänen
Venla Väisänen wrote me:
It is located in front of the Vuotso elementary school. The sign includes words PYSÄHDY (stop) and VARO (look out). Also a small inscription TALJA can be read. Talja was a traffic security oriented organization until the 1980's. The sign probably dates from the 1960's.

This roadsign is interesting in several aspects.

+ First we have the amazing detail in the drawing: the car with driver, the clothing, the shadows. Drawings with much detail can be found in several countries (e.g. Sri Lanka, Austria, Buthan, Croatia, Nepal, …) but this one here surely ranks between the best.

+ Then see how the children walk away from us. Normally they walk in the plane of the sign. Other countries were we have found this feature are e.g. The Gambia and (less obvious) Ireland.

+ The girl keeps the boy from stepping on the road. She puts her hand on his shoulder. This is typical behaviour for children of the UK-group.

+ The general approach is very peculiar.
Usually signs are designed from the car's viewpoint. They warn for objects or people that could be in the way. This sign shows the dangerous situation: the possible victims and the target of the message. A similar approach was seen in Ireland. 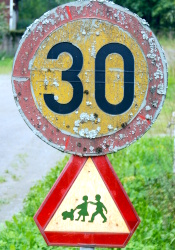 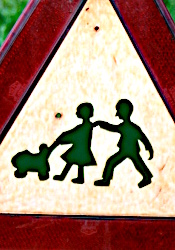 Hanko, 06.ix.2006; pict. J. Koelstra
If memory serves right, this find is one of a kind: a very nice drawing of a boy guiding a girl and the girl pushing a perambulator.

We have no reports of similar signs in any other country. We have other finds where children are shown playing, but then the toy of choice —if there is one shown— is always a ball (e.g. Canada, Trinidad & Tobago). On some rare occasion the ball comes with another toy: a hoop like in Costa Rica or a jump rope like in Bulgaria. 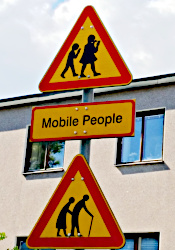 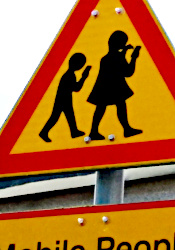 Helsinki, 05.vi.2022; pict. H. De Meyer
Smartphones are ubiquitous these days and too many pedestrians are zig­zagging across the street without paying attention to their surroundings, every day richer in fast-moving means of transport (cars, e-bikes, pedelecs, e-steps), which are themselves driven by people who often also just pay attention to that small screen.

We've seen it before in these pages: road signs exist in society, are influenced by them and can even betray underground currents. An official must have identified the dangerous situation and devised a warning sign for it.

I suppose it was a new civil servant yet to discover the limits of the service. A lucky coincidence for us collectors, as it resulted in a completely new and original sign. It does not appear in the official list of the Finish Transport Infrastructure Agency (vayla.fi, accessed 18.vi.2022).

The board is remarkable, and so is the combination with the other signs on the same pole. At the top we have the youthful smartphone addicts with the caption Mobile People. Is that People who are mobile, or People are into mobile? In both cases there is contrast with the sign below: those are the bent over elders, from Great Britain. Not particularly mobile and almost certainly not addicted to it.

The elders walk to the right. That is normal, because they come from a country where people drive on the left. In Finland pedestrians walk to the left, because they drive on the right. This is the case with all boards in this page, except this one. The children fit in with left-hand traffic. Import like the oldies? Perhaps not, as the sign is not on the official U.K. list. Influenced by the direction of the elders then? Who will tell?

Anyway, we are happy with this new design. All the more so because Finland has also modernized its road signs. The board that came into effect in 1974 (start of this page) is no longer used from 2020. It is replaced by a tasteless drawing, almost identical to the modern warning signs from Germany.