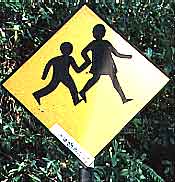 IV. 2002;
pict. H. De Meyer
Sri Lanka's roadsigns show a rich melange of influences from all over the world.

The most common sign is basically the UK-drawing with the girl up front put on a new-world canvas (see f.e. Panama for such a diamond shaped sign). There are small differences between both finds: newer signs have their canvas filled better, but the drawing becomes more curvy with weirdly shaped body parts. 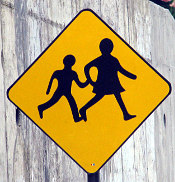 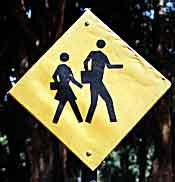 IV.2002;
pict. H. De Meyer
After they grow up two things may happen and what happens depends on the shape of their world.

● They stick to the diamond:
They swapped positions and the man now leads and the woman follows. Notice that this didn't happen in Australia in a very similar situation.
● They move to a pentagon:
And become clones of the U.S. of A. version. Notice his gentle way of supporting her in stark contrast with the former drawing.

Notice also that the boy grew taller than the girl and that our young adults now walk the streets with a tablet computer. 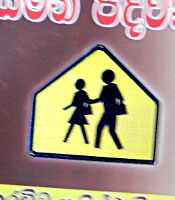 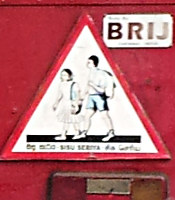 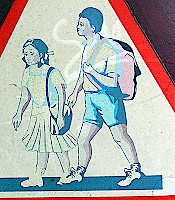 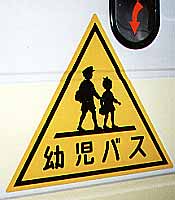 on schoolbus, Kandy, IV.2002;
pict. H. De Meyer
The pinnacle of Children's Crossing Roadsigns can be seen at the back of school buses. The drawing comes with a blue spot colour and shows real persons with realistic clothing. A fine piece of work with amazing detail.

The other sign seen on a school­bus in Kandy shows also many details and it is a copy of the Japanese sign from Tokyo.

A close runner-up was found in Nepal:
● they walk a zebra crossing
● the boy is the leader and
● his legs are transparent (not hers). 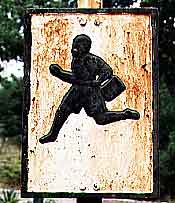 IV.2002; pict. H. De Meyer
The running boy with short trousers and a book bag would perfectly blend in between signs from India. Given its weathered face presumably one of the older signs. I've been told that old signs are never removed in Sri Lanka, only new ones added. 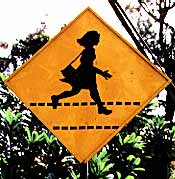 near Negombo, IV.2002;
pict. H. De Meyer
The girl too seems under the influence of India. A lovely and lively drawing making it extremely difficult to put up with the march of the faceless icons. We have another lively girl in Austria. 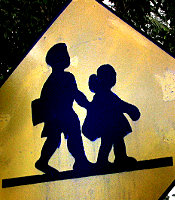