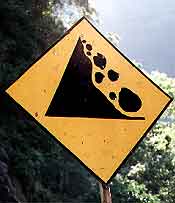 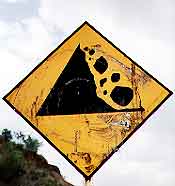 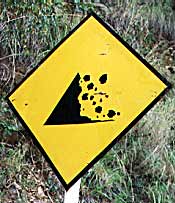 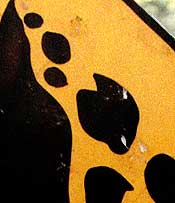 IV.2002; pict. H. De Meyer
The Falling Rocks — contrary to the children's signs and based on our small sample from both countries — are not influenced by India. But our savvy roadsign spotters will immediately point to the influence from other countries.

Most panels show the UK drawing put on a new world canvas. There is some freedom in the position of the stones. It is obvious that the design — as it was made for a triangular world — cannot fill the canvas like it should. We have seen the same combination in Ireland, but in that country the shape of the cliff was adapted to fit the canvas.

Notice that in the first find one of the boulders turned backwards and cannibalistic and is ready to gobble up its smaller relatives.

The third panel on the top row has close relatives South-America. See f.e. Peru or Chile. 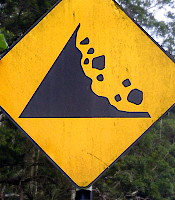 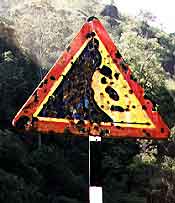