Spanish Falling Rock Signs come in many flavours. There is clearly no agreement about the size of the drawing and how much space it may fill on the canvas. Also a matter of dispute is the margin between the drawing and the red triangle. The width varies widely. The same holds true for the size and the shape of the stones.

It may seem unlikely, but we have found a way to bring some order in the designs. 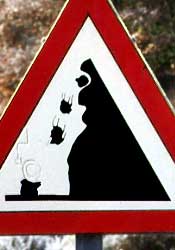 Pont de Suert (Huesca), xii.1991
First we have the one roadsign which features four boulders.

It is a most remarkable find which reminds me of some Portuguese signs with which it shares several features:

Notice the work of a local artist who gave the landed boulder a whole new meaning.

Note: I was in the region again in May 2007 and I couldn't find this specific sign back. 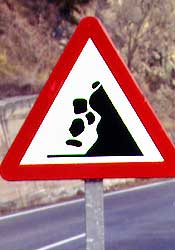 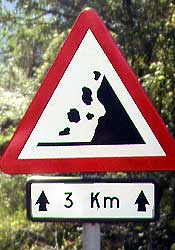 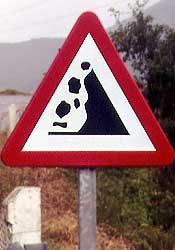 Then comes the group with five boulders.

The boulder ready to hit the road is flattened. The second and fourth rock are bigger than the others. The third rock is a pebble and stays close to the wall whose shape varies from almost straight to deeply disturbed. The shape of the rocks is rather variable (e.g. follow the two highest boulders; they vary from dots, to rectangle, boomerang or flying saucer).

Occasionally a sign is reported which follows the normal scheme of Spanish rock-signs with five boulders and the lowest stone being flat, but the make is bad beyond belief. The boulders are real monstruosities and the wall is like a huge mouth snapping to the stones. Because it is so ugly this design will probably spread fast. 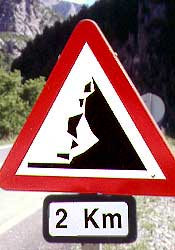 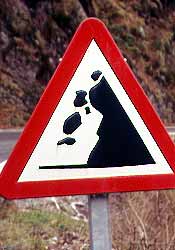 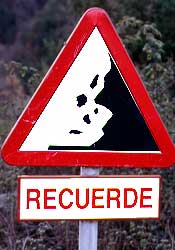 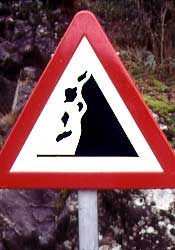 The third group is made of the roadsigns with six falling rocks.

Usually the first and second stone from the top are far apart. The third stone is the largest and often tooth-like. Sometimes all shapes are rounded, now and then even to the point that the boulders become slender and like drops (note: this design was also found in France). 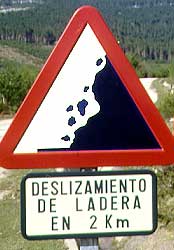 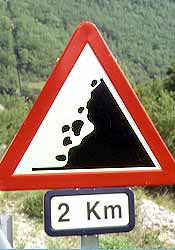 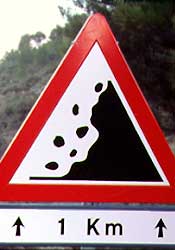 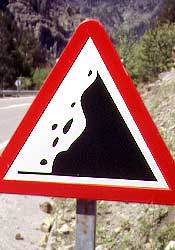 For better results the artist might have chosen a faster drying paint. 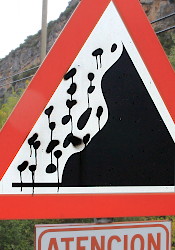 They must impress by the numbers, because their size is rather small. Again the artist has quite some freedom, but similar to the other designs, the bottom stone is usually flat and the center stone bigger. 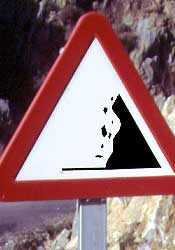 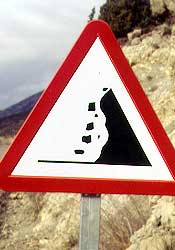 The fifth group is formed by signs where nine stones threaten to crush the unsuspecting passer-by.

Warning signs of this group come in two main classes based on the shape of the boulders. In one class the stones have all about the same size and no distinct features. In the other group the stones come as pebbles and boulders and in distinct shapes. The constellation is difficult to believe in both designs. 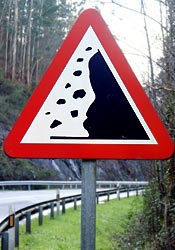 The more I look the more it looks as if two huge lips at the base are spewing out rocks into the air. Spume rocks perhaps. 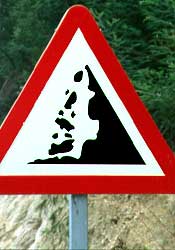 This sign differs from any other find in any other country. It is an endemic of peninsular Spain. All boulders are still in the air, but gravel is already accumulating on the road. 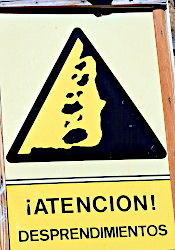