Foz do Arelho, Nazaré, III.1997; pict. A. Guët
Looking for Falling Rock Signs in Portugal is most rewarding. There is wide range of different designs and with a stone count from 4 to 8. Most are local breed. However, we are receiving more and more reports of designs influenced by roadsigns from abroad (Spain, Germany, Iceland). So, when I wrote that Roadsigns could bring you the happiest hours in your life — see Suggestions — I had Portugal in mind, but I am not sure that will last.
Most rock signs with 4 stones do qualify, though, as they have some nice peculiarities.

Firstly, notice the presence of strokes which suggest motion of the stones. We have seen them in a few other countries (e.g. France, Norway, Turkey, Pakistan), but they are a rare occurrence. 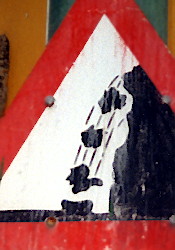 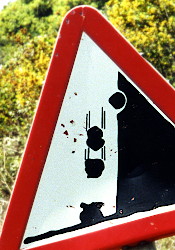 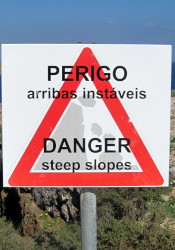 Sagres, 13.III.2010; pict. N. Breine
Then there is a boulder lying on the ground. Most signs worldwide do not have this feature. Notice the shape of this boulder. We have two makes. In the first kind the boulder has transformed into a cushion or a tray ready to receive the other stones. In the other make the boulder looks like a sea anemone eager to gobble up everything that comes down.

The path of the stones seems connected with the shape of the stone on the ground: ballistic or straight down.

Lastly the shape of the lowest stone in the air on the panels with a tray-like bottom stone is most curious. Is it a pipe? The shape reminds me of Stalin.

The last sign of the 4 boulder series shows a mirrored reproduction of the German 4-boulder sign. A better choice (†) would have been to take one of Portugal's own breed. And they could have put the same warning in both languages. The slopes are instable for locals but only steep for other people. 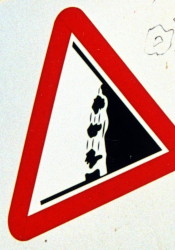 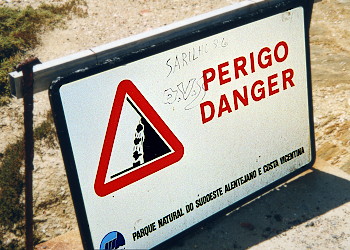 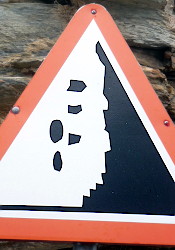 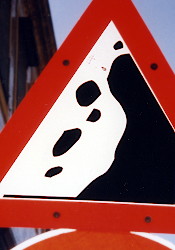 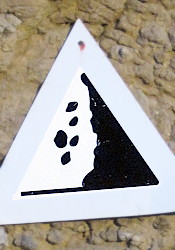 Lagos, 12.III.2010; pict. N. Breine
Warning signs with 5 stones also come in two constellations. Firstly the type where the rocks fall straight down in two columns and then the kind where it looks like the boulders are blown away fom the cliff by strong winds. One of the designs is confined to Portugal, but the other kind is also reported from Iceland, where cliffs are beaten by the same strong winds and erode in the same patterns. 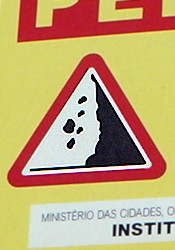 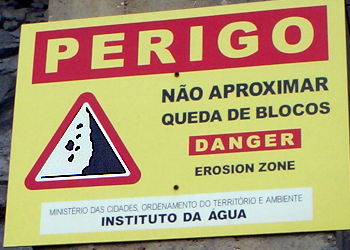 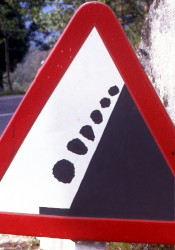 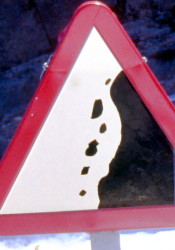 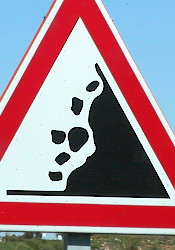 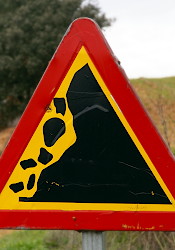 Beja District, 19.XI.2014; pict. J. Koelstra
Most of the designs with 6 rocks are only found in Portugal. That is a good point, even if several of them — f.e. the row of gradually bigger stones, or the stones falling in triplets — are rather difficult to believe.

The constellation found in Portagem comes very close to a widespread sign from Spain. The largest stone is just a trifle less tooth-like than there.

Each type of rock sign may be part of a larger warning sign. It is certainly rewarding to take a closer look at our examples coming from different government offices. It looks like there is complete freedom in the choice of the constellation of the boulders and even in the name of the departments. 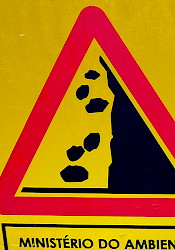 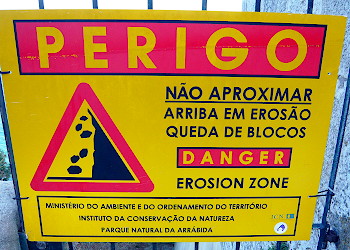 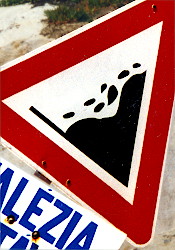 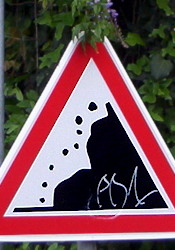 Lisboa, 11.IV.2002;
pict. Coghe & Coghe
The group of signs with 7 stones are probably the only drawings where we haven't found any foreign influence.

That is good.
Keep it this way, Portugal.

†: Unless it was done by purpose in order to project a warm feeling of home in German tourists.