Men at Work signs from Portugal 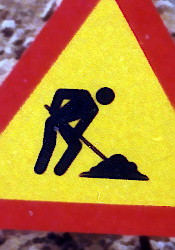 Nazaré, IV.1998; pict. S. Visser
The picture from Nazaré shows that Portugal is definitely on the wrong track. This worker is the same European nobody who has become an invasive species in the whole Mediterranean region and beyond (More about the Mediterranean workforce).

All is not lost, yet, as many good old fashioned Men at Work signs are still around. Three companies are to be thanked for keeping the old people busy : Rede Eléctrica, Construção e Manutenção Electromecânica and M.B. Pereira de Costa — at least, that is how it looks from our finds.

Safety doesn't seem to be much of an issue. Most men work bareheaded. Pereira da Costa's employees have their head covered, with something that looks more like a cap against the sun and nothing like a hard hat offering some real protection against falling objects. 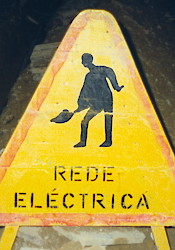 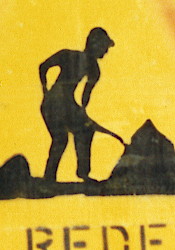 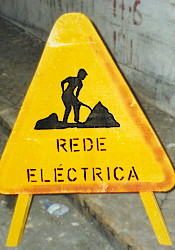 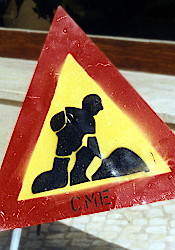 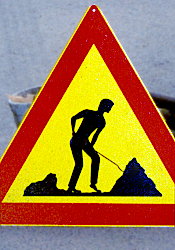 The man with the shovel is a rarity in Europe. The single other European country where this behaviour occurs is Ireland.

Men walking with a shovel full of dirt are typical for countries in Central and South-Ame­rica. We have them ticked from Mexico, Chile, Peru, and more.

The combination with the shape of the panel is restricted to Portugal and the Azores. In no other country have we ever found a triangular canvas with a man walking with his shovel. 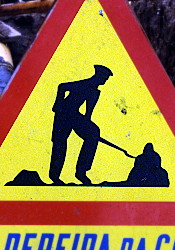 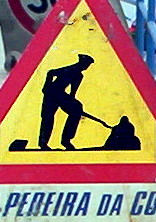 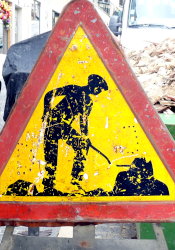