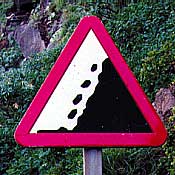 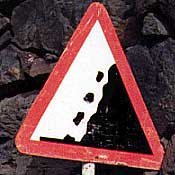 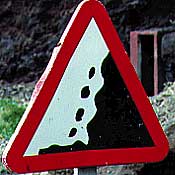 II.1993; pict. G. Coghe
On Madeira, warning signs for falling rocks, although sharing characteristics with some designs from Portugal, are much more consistent in appearance. They are a local breed, exactly like the men at work. We recognize them by
+ a succession of three or four rocks floating down
+ the rocks having a similar size
+ one, sometimes two, fallen rocks on the ground

The last point makes that Madeiran warning signs do a much better job than most designs from other countries. Let's analyse the situation.

From a road safety viewpoint a stone can have four states :
1) still glued in the mother rock
2) falling down
3) fallen down on the road
4) removed from the road

Only state 2) and 3) pose a threat. It never takes a rock more than a few seconds to come down. State 3) is likely to last much longer. It can take hours (days) before a large boulder is removed from the road. Ample time for a collision. Thus a fallen rock is a bigger safety hazard than a falling rock. 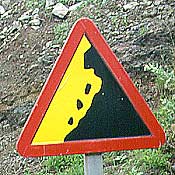 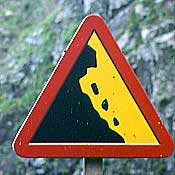 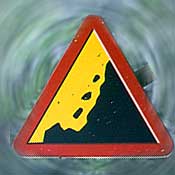 XI.2002 rotated
pict. Baeten & De Dier
Strangely enough, most countries depict falling rocks only, thus ignoring the longest and most dangerous stage in a road-side rock's life. Is it because (a) a picture with falling rocks is much more expressive ? Or (b) because they are in the dark about everyday rock physics?

Pictorial constraints don't count with text, it's therefore enough to lookup some written warnings in order to get an insight in the designer's mind. If they are aware of rock physics then they should put fallen (i.e. the most dangerous state). Falling suggests that they aren't familiar with the 4 states. We have texts from Australia, Hawaii, the U.S.A. and falling is used everywhere. Time for a refresher course?

The finds on the second row seem to deviate from the normal way of doing in Madeira. There is no fallen rock and the top of the cliff is unusual. It's enough to rotate the image to understand what happened. The cliff top metamorphoses into two fallen boulders giving the panel the expected appearance. The signs are wrongly mounted. (Find a plausible excuse in Armenia.) 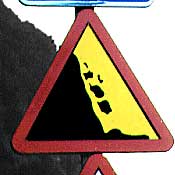 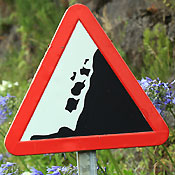 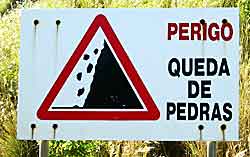 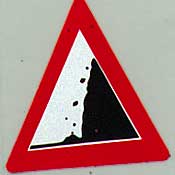 II.1993; pict. G. Coghe
Sometimes the warning triangle is integrated in a larger board with some extra text like Perigo, queda de pedras (Queda means falling). 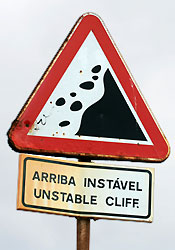 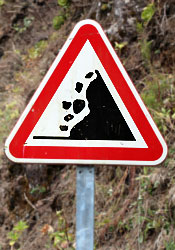