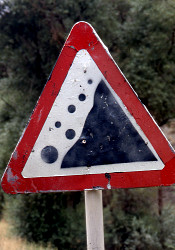 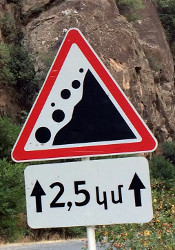 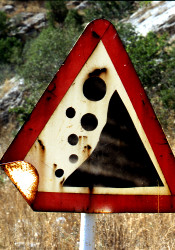 Jeghegnadzor, 20.VIII.2002;
pict. A. Anselin
First yell could have been it's the UK-group again, but that's only too easy, because any design with a big rock and some smaller ones shows a resemblance with similar signs (e.g. U.K. or South-Africa).

Armenian rock signs in fact form family with signs from Georgia, Kazachstan and Ukraine. The constellation is formed by two triplets of stones: round, ranging from small to somewhat bigger and running down from the slope. 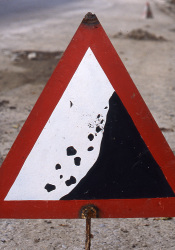 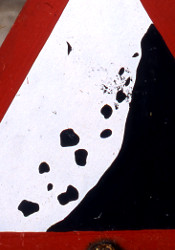 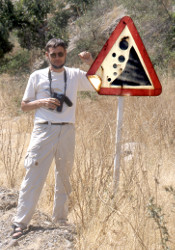 Sign spotter with a new find
It was in Iran that I was asking myself how absent-minded one has to be to mount a rock-sign upside down. Pressed by our scientific watchguard I started to think things over again and came to the conclusion that it is done by purpose. Hear my case.

Take a look at the first row. It is obvious that you cannot rotate the third sign to obtain the first. It's a mirrored sign. Notice that our pictures show the cliff next to the road at the right side which is normal with right hand side driving.

Now, imagine this.
You are the worker trusted to plant the warning sign. You arrive at the dedicated spot. You dig a hole and plant the pole. You do it at the right side of the road because that is where roadsigns belong in your country.

Now you are ready to mount the triangle. You are probably whistling a happy tune, because the job is almost done. Just some screws and the job will be done.
But then ... Disaster.

If you follow the instruction sheet which says that the biggest boulder should be at the bottom, the triangle will signal a danger at the left-hand side. You suspect an error and start rotating the thing until it fits the situation. The one valid solution could only be read by people after they passed the danger and in their driving-mirrors. Obviously too late for a warning. What could you do ?

You drill new holes and mount the panel the best you can, even if that is up-side down. And that's exactly what we see in Iran and in Jeghegnadzor. Rotated roadsigns are proof of smart roadworkers. 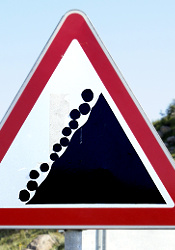