Falling Rock sign
from the UK
The most common Falling Rock Signs in Iran are unmistakenly of the kind found in Great Britain and related countries. The UK-sign, however, is designed for left-hand driving, i.e. the boulders are rolling to the right. So in Iran the sign is only adequate where the cliff which forms the danger is at the left side of the road. Iran has a mirrored sign (see below) adapted to the more common situation where a warning is needed on the right shoulder of the road.
This mirrored version is an extremely rare occurrence, though, and we think there is no stock available. This may explain why in this country so many panels are mounted with the wrong orientation. Then, at least, the cliff is at the right side. It doesn't seem to matter that the constellation of the stones becomes a trifle less credible. And the UK-drawing has the advantage that it still looks more or less plausible, even after a 120 degree rotation. Other countries are not so lucky (see f.e. Belgium, U.S. of A., or the Philippines). 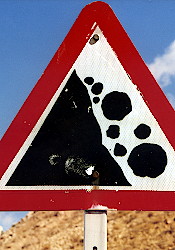 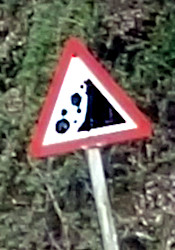 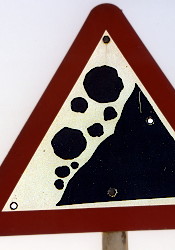 Notice that someone drilled new holes to make the new orientation possible. We have tried to understand the reasoning of the worker in our page about Armenia. 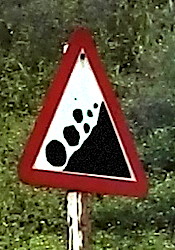 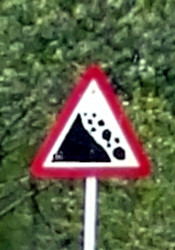 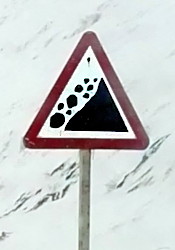 Ardabil-Tabriz, 23.IV.2019
pict. A. Klaver
Through-out the country a wide range of variations can be found. Some are still inspired by the UK-design, but some deviate far away as well in constellation as in the number of stones. 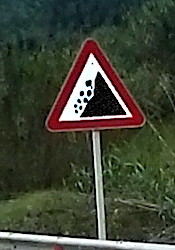 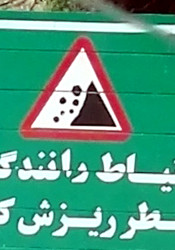 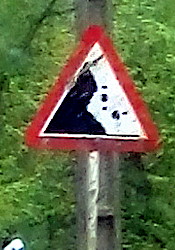 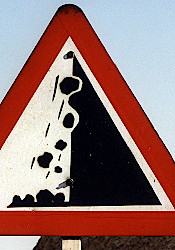