Yazd, 14.IV.2019; pict. A. Klaver
I must confess that, after my first quick scan of our finds from Iran, I ended up a trifle confused. I thought I knew that women in that country move about in what is sometimes described as modest clothing.

It's therefore remarkable that all the Children's Crossing Signs that we have seen, feature a girl who has her head not covered and who, oh my goodness, is wearing a skirt ending above the knee. And that is also true for the roadsigns showing adults.

If it is true what Monsieur Jean explains in his text about Children's hair styling world-wide, then it may very well be that Iran's road signs are highjacked by a movement in order to make women more free. The message to loosen up the clothing presciptions is radiated loud and clear at countless places along the country's roads. It is therefore probably not a coincidence that one of the common signs belongs to the UK-group where the girl is in command.

Let's hope that Monsieur Jean is right and that it works. 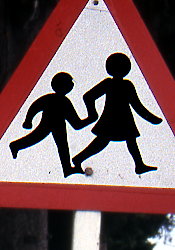 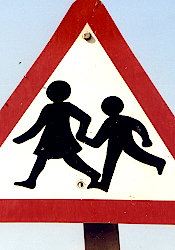 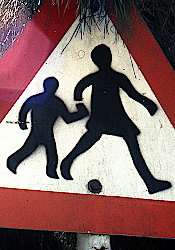 Kashan, 20.IX.1999;
pict. De Knijf & Demolder
Iran's road signage is strongly influenced by foreign designs. There can hardly any sign be found that does not bring another country to the mind.

First we have signs belonging to the UK-group where a tall sturdy girl drags a boy. It is almost always the nasty version of the design where the girl plants her foot on a foot of the boy. Her behaviour is not everywhere so bad: see Egypt for a short list of countries.

The signs on the next row are very similar to the old style Italian design with much more realistically drawn children. Notice that the boy wears trousers and carries a book bag and that the sidewalk is also present in the form of a horizontal line. The position of this line may vary. The only one other sign with a line for the sidewalk comes straight from Turkey. 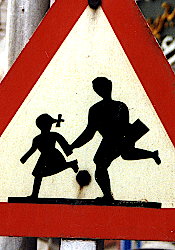 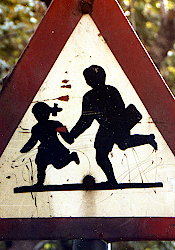 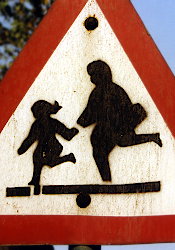 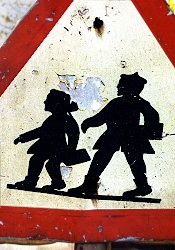 Very nice old fashioned roadsign showing many details: is it tradi­tional attire? Notice that both now carry a bookbag.
Imported from Turkey. 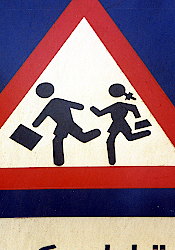 This is a design that is found every­where in the Mediterranean region. We have it explained in Malta.
Imported, also from Turkey probably. 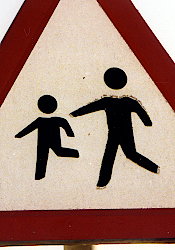 The children have now lost all clothing and their books. The only detail is a slight impression in the torso where the head can rest. Similar signs grow in Germany (probably the origin), Croatia, Luxembourg and Rwanda. 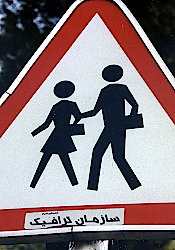 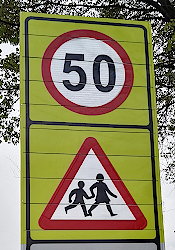 A speed limit of 50 km is at the high end of the range. Most countries set lower limits (see Australia). Iran suf­fers from a high rate of traffic acci­dents, with an esti­mated 17 000 casualties every year and 8% of them are children (†). 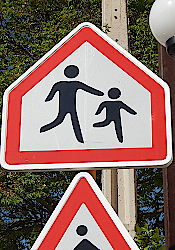 Similar to the German sign shown earlier, but not quite the same. Notice the unusual shape which is typically New World. 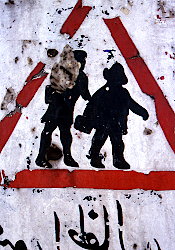 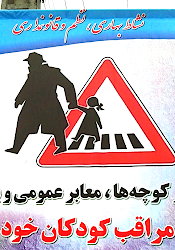 The sign on the left is difficult to under­stand: are we looking at children who are walking to a fancy dress party after school?

The right one is most disturbing. Allegedly the text says watch your children on the streets, pavements, do not be careless about them. The drawing looks more like a kidnapping, however, rather than a parent helping a child safely reach the other side of the road.