Men at Work Signs from Iran

Urumiye, 13.IX.1999; pict. De Knijf & Demolder
Most of the Men at Work signs (†) which have been reported from Iran, are similar, sometimes identical, to the roadsign found in Great Britain. Because, by convention, a man should work with his back turned to the trafic, the UK-original is not adapted to Iranian trafic. They must have realised this as many mirrored signs can be seen along Iran's roads.
The drawing comes in many slight variations. The head may be a circle, or more realistic. A neck may be present, or not. The drawing may fill the canvas, or only the center. On a rare occasion, text may be included. The spade may enter the heap near the top, in the middle, or almost at the bottom. And the face of the heap can very widely. Things which make sign spotting in Iran very entertaining. 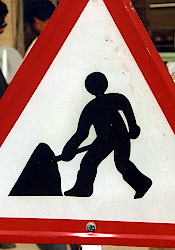 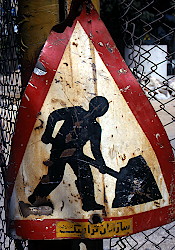 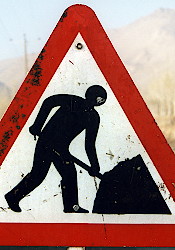 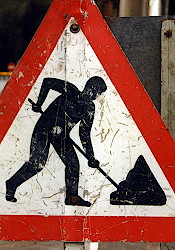 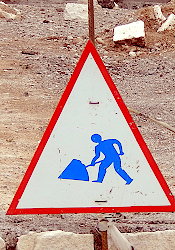 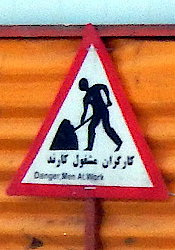 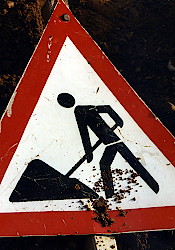 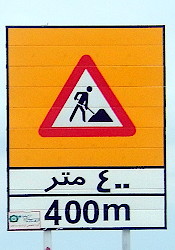 We did find some signs that do not belong.

First we have men who came all the way from Germany in order to make Iran's roads better. They don't come from The Netherlands, what you may think if you don't look too closely, because people there don't wear a belt. It is remarkable though, that a mirrored version is also in use, because the original German worker turns his back to the danger already. 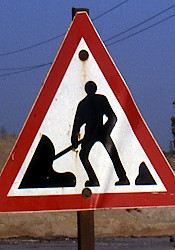 This man brings signs from Russia and several of its neighbours to the mind. We must point to some important differences though.

Notice that feet and footwear are shown. There is also a second heap behind the man. This is a feature most common in Europe and almost absent elsewhere (‡).

†: The same holds true for the other roadsigns as well. The collection of warning signs (Men at Work, Children's Crossing, and Falling Rock Signs) all following the layout found in Great Britain, is called the UK-group of signs. It is a good tool to trace historical connections between countries.
‡: more about the number of heaps in Argentina.
Path: Home / Country List / Men at work in depth / Men at work in Iran
e-mail:
More road signs from Iran: Children's Crossing signs - Falling Rock Signs