Men at Work in Germany

Look at the headgear.
Germany perhaps should learn from the neighbours Belgium and Denmark and adjust safety instructions because a cap is not enough. A hardhead is better. Even Vietnam knows that!
Take a look at Bartolomeo's Best Practices.

Hey! This is special. Before you continue your reading, try to figure out for yourself what is so peculiar.
Did you notice that the man tries to escape from his two dimensions. All other workers are simply flat.
The heap is also kind of peculiar and reminds me of the counterparts in Spain.

Cottbus, 1998
Back in 1991, when we found this man we thought he would shortly replace the panels earlier on this page. But he couldn't. A new (also match-stick) version did pop-up.

Did he fail because of his poor shovel-handling? Did some new regulation passed the European Parliament? If that's the case, then let's hope that the EC-members comply with the same enthousiasm as to most regulations about environmental issues. We'll probably never know the real reason.

Training obviously is a weak point in Germany, as well as in Poland and Denmark where other people are shown who badly need some good advice on shovel handling. Someone tried to hide that fact and in the new design omitted the blade, but simultaneously gave the poor worker a stiff leg.

In the Netherlands similar men at work are found, but without the belt. And far away, in South-Africa, almost identical panels are planted; mirrored because of the lefthand driving. 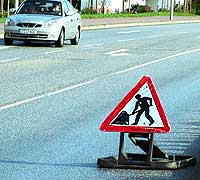 Oldenburg, VIII.2005; pict. B. Hoeyberghs
We in Europe have a memory of Germans going to the west. But this is a man from Great-Britain. In Germany. This find therefore came as a complete surprise.

The man is not adapted to the local situation yet. Men at work never face the traffic, they turn their back to the danger.
It's probably a British company doing road repairs in Germany that brought the warning signs from home. That should not happen. It's bad for our collections if everything gets mixed up. There is a leak in the regulations. Volunteers are needed to lobby with the Council of the European Union.