Ainsa, 29.vii.2021
The year was 1996 and we were canvassing the Jacetania region of Spain looking for old watermills (see Bernardo's mill project). We arrived in Ara, rounded a corner and there it was: roadsign delight. A marvelous Men at Work warning sign coming from the good old times when roadsigns were still made by real craftsmen, and were allowed to show character.
The drawing breathes the straightforward approach of the past when there were no Bartolomeo's safety advices and no slices of Swiss cheese with the holes aligning. Real men back then didn't need hard hats. They rolled up their sleeves and started digging. 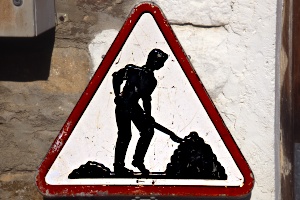 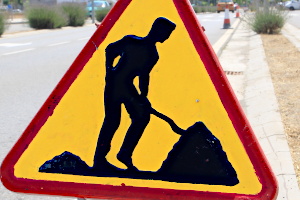 Did you notice the position of the feet and legs? Compare this with the equally well drawn Danish workman of old. One must be wrong in my opinion. This is something we should pay attention to the next time when we are in a queue.

Denmark
Though we did find older Men at Work signs occasionally, we never resighted a similar specimen. The one sign that came close was only found after many years in Ainsa.

The other old style signs (see row below) all share a peculiar feature: the worker plants one of his feet in the heap behind him. It is a habit which is almost nowhere seen outside Spanish territory (see also Canary and Balearic Islands). The few countries where one or two cases were reported are Portugal, Cape Verde, and Sri Lanka. 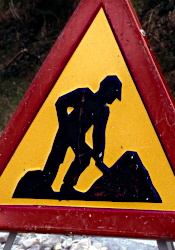 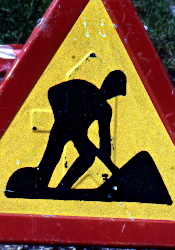 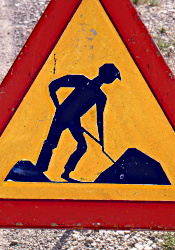 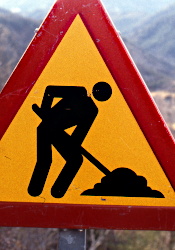 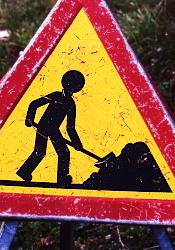 Colunga, vii.1997
The workman on the omnipresent modern roadsigns has lost his dis­tinctive features and is degenerated into the sketchy Mediterranean worker (explained in Slovenia).

Sometimes a modern French warning sign can be found. He features a neck and he is equipped with feet which makes him slightly preferable.