Most rock warnings belong to the group which is most common in Spain. Six stones with the third from the top being a tooth (or is it a mush­room?). There is some variation in the shape of the cliff and the position of the stones. The lowest rock is flat and no boulder is on the road.
The find from La Gomera is difficult to interpret. The regular rock warning was already in place, but someone felt the need to fix an additional panel carrying the text Beware, risk of rock falls. I ask you, why is that for? Is the original, standard warning sign not clear enough? Then why confuse people with a smaller sign using a different colour scheme?
Is it perhaps to make German tourists feel at home (check the German rocks) ? Do the Canarians perhaps have reasons to believe that the Germans can't understand the Spanish sign? But then the caption won't be of much help. Questions, questions. 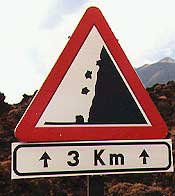 Pico del Teide, XII.1998; pict. Baeten & De Dier
The finds from Pico del Teide and La Gomera are peculiar for Spain and its dependencies. We count only four boulders. One is already resting on the road. The other stones are more or less like starfishes and the top rock (is it an anemone?) is still attached to the wall.
We have only one related find from Pont de Suert in Spain. where the bottom rock is an anemone gobbling up the other pebbles falling down fast. The velocity is indicated with speed-stripes. 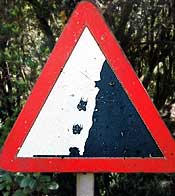 La Gomera, 2006
The warning sign found on La Gomera differs from the earlier one by the presence of speed suggesting stripes.

Someone with a creative mind improved the design a bit in provinding eyes and a mouth to the boulders. 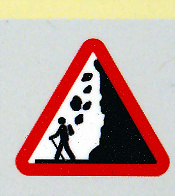 Tenerife, 31.X.2014; pict. J. Koelstra
This warning sign found along a hiking track is based on a design from Iceland. The stones are not really falling, they are more like floating down and away from the cliff. The same constellation can be seen in Greece and Cyprus also.
Path: Home / Country List / Falling Rock Signs in depth / Falling rocks on the Canary Islands
e-mail:
More signs from the Canary Islands: Men at work - Children crossing
Road signs from Spain: Men at work - Children's crossing - Falling rocks