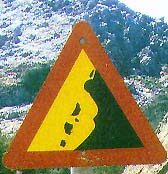 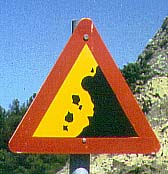 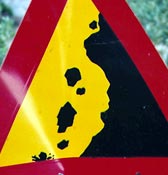 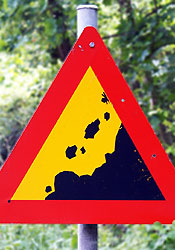 Rentina, 27.V.2009; pict. J. Koelstra
The most common Falling Rock Sign in Greece is limited to that country and its many isles. The bottom two thirds of the wall are hollow with a dent at the center. Near the top of the cliff is a weird knob which looks like a women's breast. The boulder count is five: one isolated above the breast and the rest below. The shape and the position of the stones is largely free.

The find from Delfi features a supplementary rock on the ground. It's one of those very rare designs (e.g. Pakistan) where impact is suggested. It's weird that this stone manages to stay in place when the panel is rotated (Rentina). Is it a snail perhaps? That would explain it.

The Esimi drawing is also a local endemic which is clearly inspired by the Delfi style but characterized by four boulders only and more fluid lines. 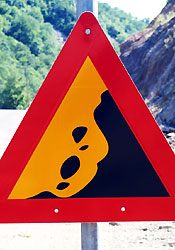 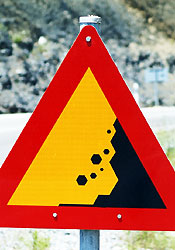 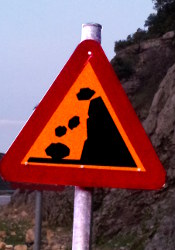 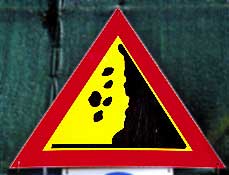 Hosios Loukas, V.2008; pict. H. De Meyer
Greece is under a lot of pressure of other countries wanting to see their design in place. The Evros design was earlier found in Slovakia (It's not Italy because the drawing there fills the canvas entirely.). The Sikaminea sign with the plump boulders comes from Germany and the Hosios Loukas find is a copy of a design already found in Iceland.

I'm not happy with the new arrivals. We all know how it goes with the introduction of aliens. Good Bye to the endemics.

Great Britain
An innovative approach at an archeological site in Athens. The available space was limited and rather than resizing the original drawing it was cropped. Naturally they took a design from abroad as their source. In order to attract more British tourists?
Path: Home / Country list / Falling Rocks in depth / in Greece
e-mail:
More roadsigns from Greece: Men at work - Children's Crossing Signs
Roadsigns from Crete: Men at Work - Children's Crossing Signs - Falling Rock Signs