Irish children-signs don't follow European custom where normal warning signs are triangles, even in Great-Britain. Irish signs in shape and colour choice belong to the American group. It doesn't come as a big surprise and confirms roadsigns again as good tools to trace relationships between countries.
Let's take a look at the local Irish characteristics:
Question:
How did the layout travel? West or East?
The second local property could mean that the design travelled west. Roadsigns tend to move from a detailled drawing into iconized match-sticks. American signs are therefore younger.

Note from our scientific adviser:
Other possible explanations exist. The design could have come from the new world. Cut from its roots evolution halted in Ireland while the original design in the new world continued to evolve. A new world find of the primitive design would support this theory. 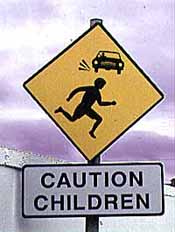 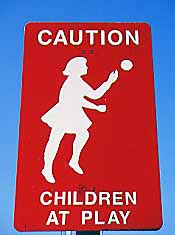 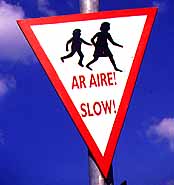 The Caution Children sign from Kilkee is special because it features a different approach compared with most panels. Signs usually warn for objects or people (children, men) on the road. They show the possible victims. This Irish sign shows the dangerous situation: the possible victim and the target of the message.

Compare this with the Children at play picture alligning with common practice and showing only the possible victim. Compare also with the similar Chilean sign.

Note: Our scientific adviser warns us not to drop the following hypothesis without further research.

Assume the Kilkee sign is in concordance with common practice. The danger consists of children and cars with drivers jamming on the brakes.
Theory says that persons on the sign cannot be the recipients of the message. The pictorial story must warn people seeing it of imminent danger. Could it be persons unable to stand the view of children and cars on the same road? They now have the option to look away or to avoid the place alltogether.

Finding the Elderly people sign in Ireland would add strong support to this reasoning. It would act as the reverse sign warning children and drivers of people likely upset by former's speed.