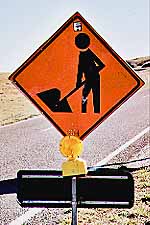 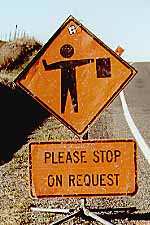 Picton - Kaikoura (S.-Isl.); 24.vii.2001;
pict. Breine & Van Den Bergh
New Zealand's road signs are a mix of influences. from allover the world. The Children's Crossing signs come from Great Britain and are enriched with an Australian flavour. The Rock signs with minor changes are of Australian stock. The men at work are exact mirrors of the signs used in Hawaii with even the improbable shape of the heap neatly copied. It reminds me of its wildlife: almost anything alive is imported.

Considering his posture, the man probably won't suffer any back-aches. It is remarkable how men at work signs in some countries show people during a breathing-spell while other designs sometimes show people working to their death (f.e. Egypt). Is that a reflexion of the administration's attitude towards hard work?