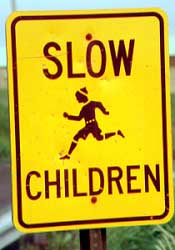 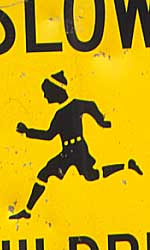 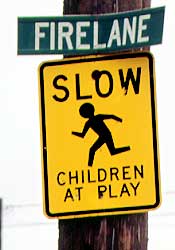 Off they went — after a quick glance at the official list of the Travelers' Century Club — to Alaska. Looking for roadsigns. Our team cruised from south to north and back again and with heart-warming results. Only rarely is a drawing of this quality found. Look at the detail: the cap, the face, the trousers, the shoes and the belt. I'm euphoric.

The roadsign as a whole isn't very convincing though. And the people responsible knew it, because they were trying to fix it. First take the probably earlier roadsign found in Washington. The boy is almost identical but the text reads Slow playing. What's wrong with that is explained at the page about the U.S.A..

The improved version featuring Slow Children still shows the same flaw. Worse, it gave reason to a now widespread joke about retarded children in North-America. The fine drawing was kept and that makes me happy anyway.

Eventually the type size was used to discriminate between command and reason - also more clearly stated: Children at play. The poor child didn't survive this last improvement and is rapidly sliding towards icon-country.

They should think again. The easiest way to make the message unequivocal and to kill the jokes is opting for a text only panel with a colon in the proper place, like this: SLOW : Children at play. The drawing is superfluous because the text says it all. A valid alternative is to show the child (the reason) underscored with SLOW (the command).

The sign just analysed isn't the only one with unnecessary features. Look at the find from Homer. I ask you, where would you plant the pole? A bit further along the road with the caption Just passed, check radiator grille ? In my opinion, the person responsable for Alaska's roadsigns was in computer of telecom business before he took this job. 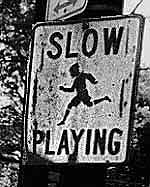 Children in the U.S.A. 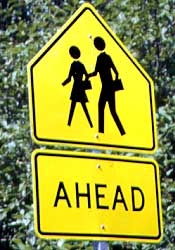