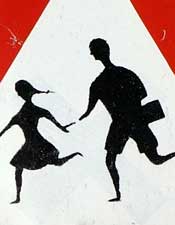 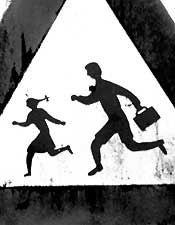 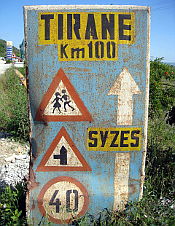 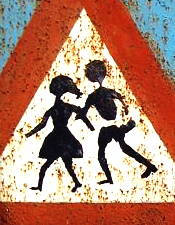 A country's history is reflected in its roadsigns, I jotted down. Almost routinely. But then my self-confidence got a shake: the drawing at hand is very close to the old Dutch design. So suspiciously close that I had to check with our man on the road. No mistake, Elbasan it was and I headed for the local library.

Truly, relations existed between Albania and The Netherlands. More than once even. The first time was just before World War I and surely too early to be of influence on roadsigns.

The second time was in the 1970s when China was Albania's big friend. Back then Dutch Maoists united in the Marxist-Leninist Party of the Netherlands (MLPN) supported Albania's regime. The party was generously supplied with funds from China —some lucky members could even shake hands with Mao! One of their realizations was an organization offering trips to Albania. Our finds must be the result of the obligatory inter­change of presents between visiting groups.

After more than 30 years it became known that the MLPN was a construction of the Dutch security services and that few of the members were genuine. I say, Roadsigns lead to new and thrilling knowledge and A country's history is reflected in its roadsigns.

But let's get back to the sign.
The Dutch version gives a better impression overall, more realistic, more detail. A careful look at the Albanian panel reveals a huge cross behind the children: this is a recycled yield sign! The same holds true for the find from Maqellarë: an arrow shimmers trough the white baselayer.

Basically the same drawing like the previous finds. Notice however that the children are walking, not running.

For the speed limit in some other countries: see Australia. 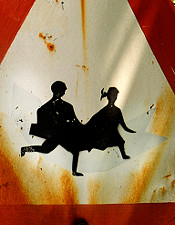