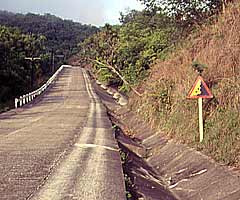 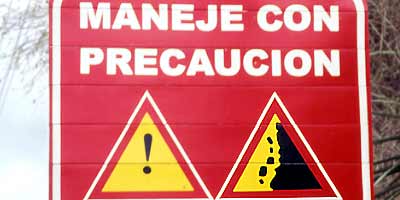 La Farola -> Baracoa, 17.V.2005
We knew from a team member's visit in 2001 that there was at least one falling rock sign on the island and after fourteen days we were inclined into accepting it being the only one. But after 2350 km we were suddenly infatuated with the island, its people and their leaders.
After that glorious moment several more falling rocks crossed our path but apparently the find from 2001 is the only road­sign which has been found only once. I couldn't find any similar design in our collection. It's probably a local design not influenced by any other country. Pitty it has suffered so much. 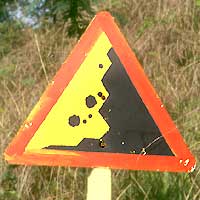 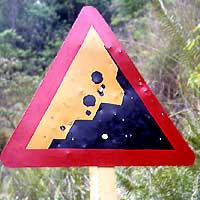 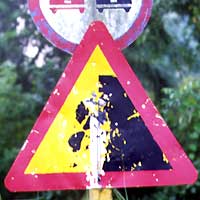 Soroa N.P., X.2001; pict. H. Jochems
All other finds belong to one of two groups. The first group occurs mostly around Santo Domingo and is the same species that we have seen in Slovakia and only there. Nowhere else. It's not the Slovenian nor the Italian kind which are indeed very close but feature no, or a longer, bottomline.
Notice that one of the panels is wrongly mounted. Like I explained in Armenia it is probably by purpose.

Spain
The second group features more natural shapes. The boulders are irregular, just like the wall, and they are numbered four or five instead of six.
It looks like the drawing is inspired by a roadsign from Spain. 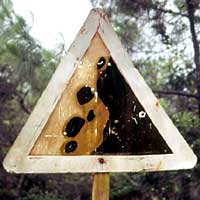 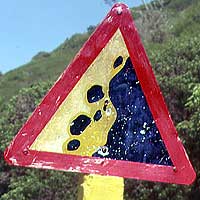 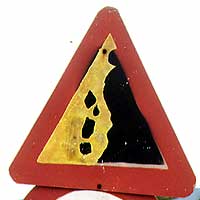 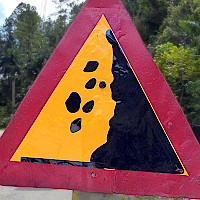 Topes de Collantes, 13.II.2019; pict. O. Dochy
Our latest find in the center of the country doesn't give much trust in the future of roadsign collecting in Cuba. The design —both the constellation of the boulders and the face of the clif— is a facsimile of a roadsign from Iceland.

It is rather alarming that Iceland managed to push this design through to already seven other countries also. The drawing is reported from Portugal, Greece, France, the Canary Islands, and three others apart from Cuba and Iceland itself.