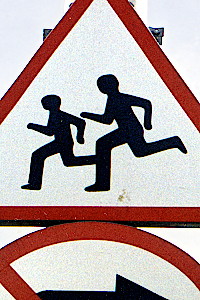 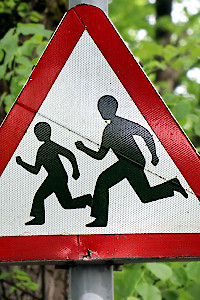 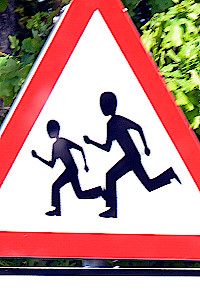 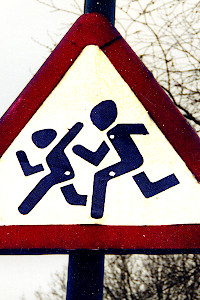 Tallinn, 27.IV.2001; pict. C. Verschuere
The signs on the first row all show basically the same drawing of two people (boys) running after each other. There are slight variations in the details: their body mass varies widely; they may grow taller and almost bump against the triangle; shoes and pants may be shown.

The configuration is clearly based on the design which was (and is) wide­spread in the former communist block. We have this old format reported from here in the west reaching to the far eastern regions. Most countries, however, adhere to the Russian make (see Belarus for an overview).

The Russian make is characterized by the severed body parts. And while we have these fragmented youths reported from Estonia, it was a long time ago in 2001 and we haven't seen them here ever since. So we presume that Estonia has made itself free from Russia and now continues with its own national breed. We, roadsign addicts, do know that a country's history is often reflected in its roadsigns and it doesn't come as a surprise that Russian influence is still noticeable.

There is one important change though. The old Russian drawing is full of aggression. The shorter person swings an arm to the back right in the face of the taller person. The other arm is held upright in front, obviously to counter retaliatory blows. In the new design the aggression is gone and the country may very well be on the road to a more friendly and peaceful society. 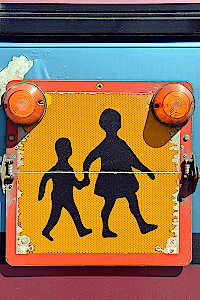 A mirrored version of this drawing was seen on a school bus in Iceland. Did Iceland donate some of its older buses, or is it a coincidence? 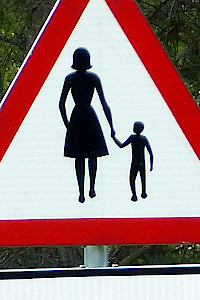 This really is remarkable. When one adult is shown walking a child, then it is always a man with a girl (e.g. Uganda, Hungary, Czech Republic). We had, up until now, only one excep­tion: a nice design from Burma where a mother brings a child. And this is our 2nd exception: a fine woman with a boy.