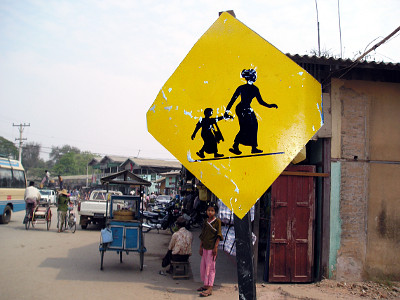 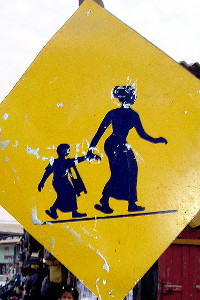 Bagan, 02.IV.2005; pict. M. Plessers
Burma is certainly one of the must-see countries for the serious roadsign collector. It is a country with plenty of roadsigns nicely drawn true to local custom. Many countries should take an example (e.g. —deep breath, try to be strong— Belarus).
The first series of samples feature a mother with offspring. The body shape doesn't fit a man wearing a longyi and a older sister would carry a bookbag. So it's definitely a mother with child. 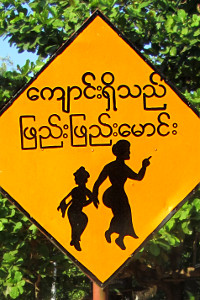 Most of our finds are amazingly true to life. Notice the local style of the clothes —there is even a knot in the longyi— and that the chil­dren also carry the very popular shoul­der­bag with two bunches of tags of cloth.

Most couples are walking but we have a sign with a posture suggesting they are preparing for a sprint. That is entirely understandable, advised even, considering Myan­mar's meagre road safety record which is now a major public health issue. †. 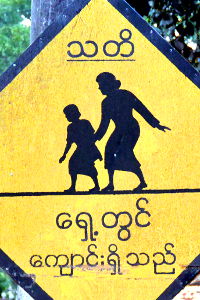 23.XII.2013; pict. Thoonen & Courtens
Another group is formed by signs featuring a male person guiding a shorter person whose sex is not always clear. They carry the shoulder­bag of the first series, but their load is augmented with a book — or is it a bookbag?

There are few other countries where a man may accompany a child: e.g. Hungary, Czech Republic. 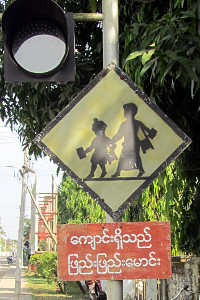 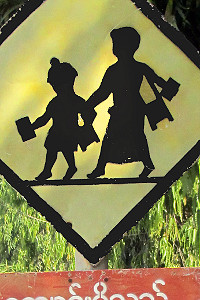 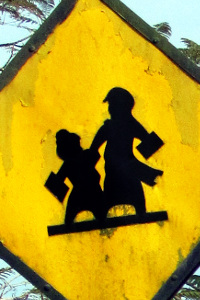 25.XII.2013; pict. Thoonen & Courtens
Not all is well though. Changes are underway and not for the best. The children on the row below have dropped their native fashion for a more European style. I am happy that they still hold to their beloved shoulderbag.
The sign right is disturbing however. The boy wears a cap (that is not disturbing me) and tries despairingly to reach his care­taker. The sizes are out of proportion. The scene reminds me of equally alarming drawings in Madagascar and Nepal. 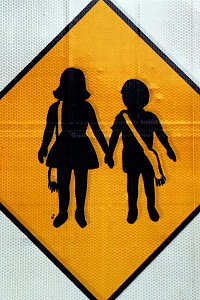 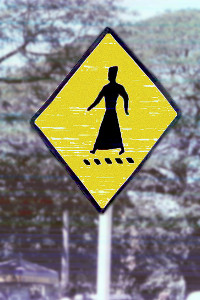 10.I.2014; pict. Thoonen & Courtens
It strikes me that whenever a pedestrian crossing features one per­son only, it always is a man (e.g. Nigeria) or a genderless thing (e.g. Dominican Republic), never a woman.

Roadsigns with more than two persons are rare. When three are drawn it's usually all children (e.g. The Gambia). Here we have two other versions and both are extremely rare.

The first is probably a family, parents with a child. A similar situation was only found in the U.S. of America.

The second constellation —a mother with two children— is only recorded from Belize and Spain.

It's a shame though that the quality of the drawing goes down to the worst of the worst: a static and lifeless modern design giving no trust in Burma's future as an leading example in roadsign design. 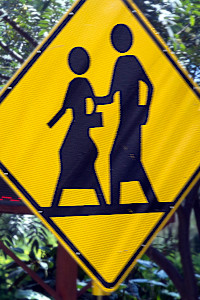 03.XI.2017; pict. M. Tailly
Our latest find seemingly confirms the shift to the modern no-nonsense (featureless) approach of roadsign design. It remains to be seen if it is a good thing for the safety on Myanmar's roads when drivers won't make the connection anymore between the drawing and the real world.
†:
Conquering the road safety challenge — Frontier Myanmar, 13.X.2016
at http://frontiermyanmar.net/en/conquering-the-road-safety-challenge
(latest check: 28.III.2020)
Path: Home / Country list / Children in depth / Children's signs in Burma
e-mail:
More roadsigns from Burma: Men at Work - Falling Rock Signs