road to Gondal, 13.XI.2013; pict. H. De Meyer
Given India's history it is not surprising to find Men at Work signs of a make also seen in Great Britain. But, in a way, it does come as a surprise, because the other classes of signs in our study — rocks and children — clearly stand apart from their U.K. brethern.
The second drawing brings designs from several Euro­pean countries to the mind: two heaps with a worker in between (e.g. Belgium, Portugal). 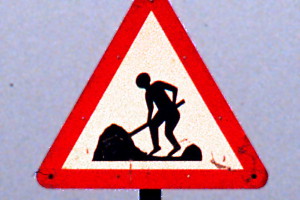 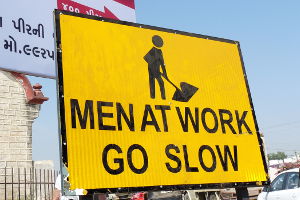 The person is tiptoeing. It is likely not the best approach to this kind of hard work. Or is it a sign of stress because she can't possibly comply? Who will tell?

Is it a statement, or an order, and to whom is it directed, drivers or workers? Utterly confusing.

Hawaii
The same drawing is also found in the U.S. of America. They even copied the improbable shape of the heap.
Path: Home / Country list / Men at work in depth / Men at work in India
e-mail:
More road signs from India: Children's Crossing Signs / Falling Rock Signs