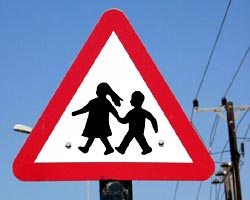 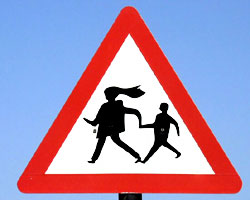 between Muscat & Sohar, 9.VI.2005; pict. C. Pedersen
Children's Crossing Signs in Oman belong to the UK-design group (see Great Britain, Iceland, Iran and more) where a sturdy girl is guiding a boy. It's once again a case where roadsigns give us a hint about a country's past. (Sidestep: Did you know that a long time ago Zanzibar was part of Oman's imperium?)

The first sign (counting from the left!) is in fact better than the original. The drawing is better : the children have a face. And their behaviour has improved a lot: there is no dragging anymore, no more feet trampling. Both children are quietly walking towards school. There is more. Take a look at Egypt, or Iran, who are also inspired by the UK-design. They slavishly stick to the template and keep the buttonheads. But Oman's designer took care to localize the design. The girl is wearing a headscarf (the traditional lahaf, or is it the laysoo ?).

The second sign comes as a slap in the face. The designer got dismissed, or under the influence of cubism, or, worse, alcohol. The dragging and the foot trampling is back and the poor children were awfully distorted to make it happen. The drawing is radiating fast forward and that is emphasized by the drawing of the scarf which now swings in the air. At last one thing well done.

Notice also that the girl changed into trousers. That is very peculiar, for roadsigns at least. The only other roadsign featuring a girl with long trousers was found in Austria.

The signs below are probably local breed. The people shown look more like adults and they carry a bookbag. The male seems rather muzzy. The female's head is drawing our attention, though. Is it a scarf with horns? The ponytail raises questions: is it a ponytail Prussian style like in Germany? We have a similar sign found in 2005 and there a double ponytail can be seen. Could it be part of the scarf; kind of an ornament? Who will tell? 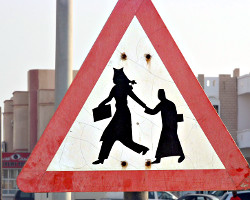