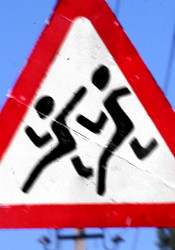 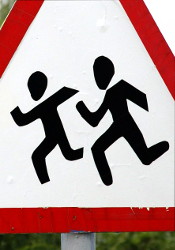 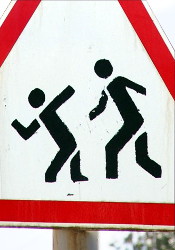 Kyzyl-Suu, Issyk-Köl, VI.2016;
pict. J. Koelstra
Most signs found in Kyrgyzstan belong to the Russian Group where the children are running and the taller person tails the shorter one. No details revealing gender are shown. See Belarus for a quick overview or Armenia, Uzbekistan for more examples.

Notice that oval heads (2 signs left) pose a problem: people are not sure about the right orientation.

The sign shown in the banner stands apart. It reminds me of some signs from Portugal (see Mediterranean Group) but the children swapped positions and they lost their clothing.

Kyrgyzstan agrees with other countries under Russian influence, e.g. Kazachstan, Albania, about the appropriate speed limit: 40 km. In other countries (see Australia for a short list) the range varies from 20 up to 90 km, which is hardly a limit in my opinion.