Men at Work signs in Tanzania

Iringa, 16.VII.2013; pict. M. Tailly
One can't shovel a heap away with both hands at the far end of the shaft. Digging from the base to the top will most likely result in the heap collapsing and spreading out and double the amount of work.

This calls for training and some sound advice.
Maybe someone should tell him that the signs at the train station in Basel (Switzerland) are not meant as examples to be followed.

The designers appear to be rather good with people, but they are weak with the heaps. No decent heap may exist in the shapes shown. The sand would rearrange itself within seconds into something more adapted to earth's gravity.
We have a find from Hungary where the heap is in fact a hay stack. This could explain our first heap but not the weird thing from Mufindi and certainly not the dented thing hovering above the spade. More research is needed. 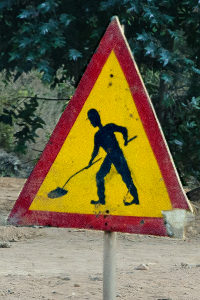 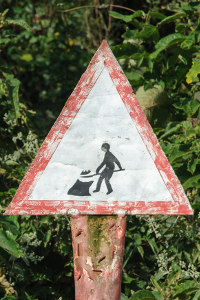 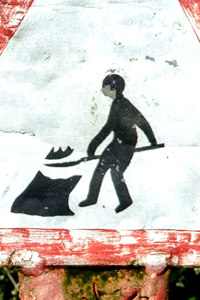 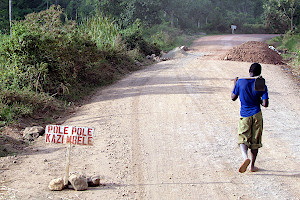 Reminds me of the roadsign on Tristan da Cunha where in very much the same way some stones are improvized to fix a rod with a warning (on Tristan it's a gauntlet which carries the message) .