In 2003 team members contributed to the Millennium Forest 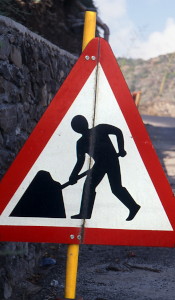 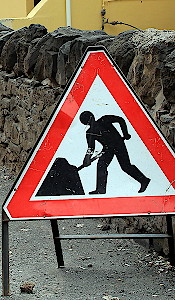 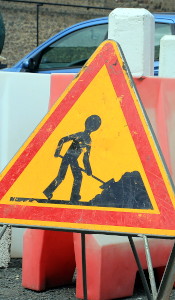 Jamestown, 18.IV.2018
The most common Man at Work sign is straight import from Great-Britain. He was there in 2003 and he was still very busy with digging in 2018.

We know that he does not originate from South-Africa because men there are not wearing wellingtons and they do not push the spade so deep that the blade disappears entirely into the sand.

But not all is well on Saint Helena (†). On the occasion of our 2018 visit we were barely a few steps on land and we had already a disconcerting encounter.

We were greeted by a worker from outside the Common­wealth (of Nations). The line painting was done by the official French Worker or one of his nephews from Morocco. Yet a new step towards a flat world. And this is happening on territory boasting its endemics and uniqueness.

† we don't have the airport in mind.