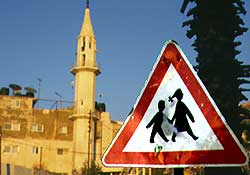 Wadi as Sir, 26.XII.2000; pict. Baeten & De Dier
We recognize influences of several countries. Obviously also the children's signs are part of the project which is introduced at the page about Men at work. Our teams came back with panels reminiscent of Germany, Great Britain, Sweden and perhaps Italy. All have in common that the girl takes the lead. That is remarkable. Is it a hint to the male part of the population? Or is it just based on the facts of life? Girls, if they like it or not, often have to take care of their younger brothers.

There is a huge difference in quality in the drawing of the most common children's sign. Look to what can happen to the feet and the head. 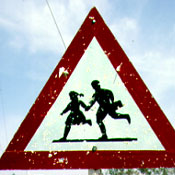 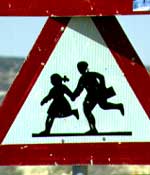 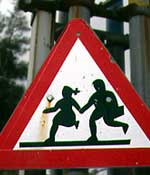 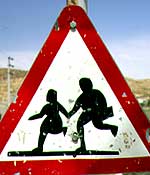 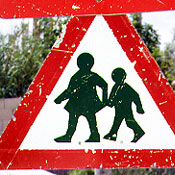 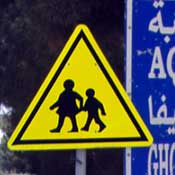 Sometimes something strange happens to the signs inspired by the Swedish example. On more than one site the usual European colour scheme was replaced by New-world elements. The result is a hybrid of a European triangle with a pair of Swedish children drawn on an American yellow background with thin black borderline. 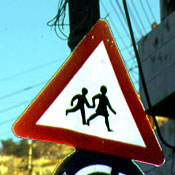 Wadi as Sir, 26.XII.2000;
pict. Baeten & De Dier
Great Britain also succeeded into influencing the right man in the department. The difference between the Swedish and the UK kind is that the UK-children are in a hurry and that the girl crushes a foot of the boy. 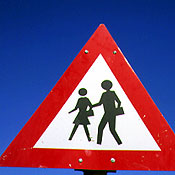 Wadi Musa, IV.2004;
pict. Vanacker & Kesteleyn
This find is probably the answer to the opening question. The girl — now a grown-up— is still walking ahead, but the man is taking over. He now takes her with the elbow and she has lost control.
My conclusion therefore is that the designs are based on the facts of life. Except for the clothing, obviously.
Path: Home / Country List / Children's Crossing Signs in depth / in Jordan
e-mail:
More roadsigns from Jordan: Men at work - Falling Rock Signs