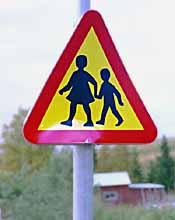 Saxnäs, Västerbottenslän, ix.2001;
pict. J. Koelstra
Sweden shares this design with Finland and Iceland. It belongs to the widespread U.K.-group of children's signs. The design is mirrored to accommodate for right-hand driving.

Readers with a trained eye will notice that the Scandinavian offspring enjoyed a better education than their British counterparts. On a typical UK-sign there is more dragging going on and the girl silently crushes the boy's foot. Read more about this design in Finland and Iceland.

Our second find —spotted at the Skansen Open Air Museum and presumably an old design— is a teenage version of a roadsign found in Iceland. The young ones are jumping rather than running. They'll also burn some fat during the years to come. 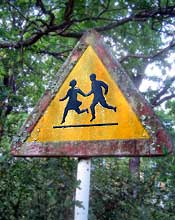 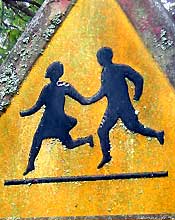 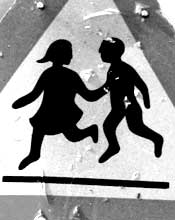 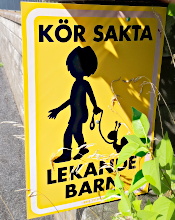 The interference between different lines of thought shown in the image is remarkable. Children, while they are playing, are often fast and running of in unexpected directions. In order to anticipate such pseudo random movements, drivers are expected to drive slowly. This is in line with the recommendation at the top of the panel.

However, the child leads a tortoise, which is an animal that we do not immediately suspect of rapid movements. It looks like a contamination from the drive slowly message as a result of which the child is depicted as a slow moving obstacle. Instead the scene on the panel should suggest something fast moving and unpredictable.