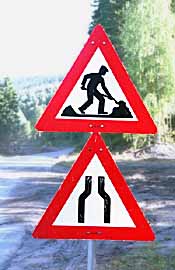 Gransherrad, Telemark, ix.2001;
pict. J. Koelstra
Our first find, from 2011, shows a very nice drawing with much detail. The design also shows no clear relation­ship with the neighbouring countries.

We found the same design in Longyearbyen on Spitsbergen. That is where we offer also a possible explanation for the fact that the man cannot keep his feet on the ground (It happens with more people, but it must be a trifle inconvenient during digging).

The second find brings us back to 1997 when we found the same man with his poor spade handling in Denmark. The people of Norway may then vote repeatedly against the E.C., they can't stop it from seeping in. 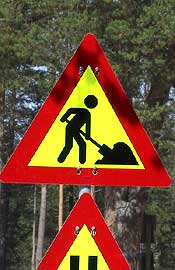