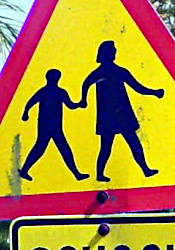 The drawing for the children's crossing in Fiji is clearly influenced by the UK-design. The clothing is similar and the hands in both cases are knobs. Could that be how they procreate? In which case what we call the boy would be in fact a new female not ready yet to be released in the environment.
UK children 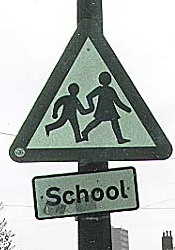 Compared with the UK, some small improvements were applied. The head of the girl is now a real head and she refrains from crushing the boy's foot. Take a closer look to her armpit. A yellow hairline is just noticeable and gives some depth to the scene. Most interesting and probably unique.
Taveuni Island, 20.vii.2015;
pict. Baeten & De Dier 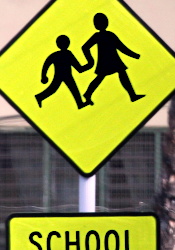 The local produce is replaced by a new breed which is a hybridisation of the UK-drawing on a canvas of the shape used in the new world.