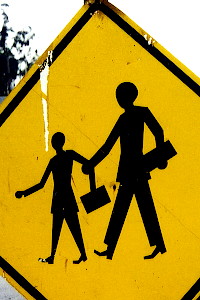 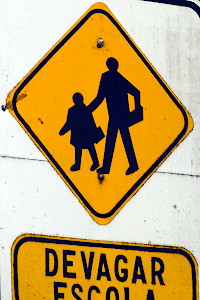 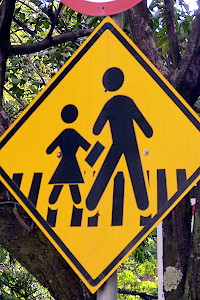 19.VI.2014; pict. O. Dochy
Adolescents or adults, but because both are carrying a book bag, probably the former. Our oldest samples are rather fine specimens compared with the more recent finds.

Both persons are wearing the kind of dust coat which is typi­cally seen in southern-american countries, like Argentina. Such a coat tends to hide gender features, but the artist made sure to give the shorter person the narrower waist of a woman. There is also a difference in the cut of the trousers.

Notice also the fine detail in the shoes.

All the craftmanship and the attention to detail is gone in the more recent finds. It is still possible to recognize both sexes, but our children now suffer from misformed bodies. They have lost their individuality and are joining the characterless products that are present in so many other countries.

There is one point that is worth some attention though : the presence of the zebra crossing. On rare occasions a pedes­trian cros­sing is suggested with two dashed lines (e.g. The Gambia), but only exceptionally do we see the alternating bands of a zebra crossing. In fact, of the more than 150 coun­tries in the collection, only four more, all in the eastern hemi­sphere, have a sign with zebra stripes (e.g. South Korea, Malaysia).