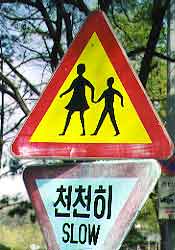 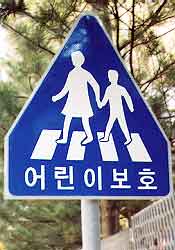 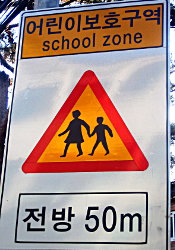 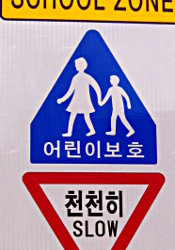 Gangwa, 02.XII.2012; pict. J. Breine
I am surprised by our samples. I would be more surprised had we found Japanese design, but instead of being influenced by North-America, Chil­dren's Crossing Signs in South Korea belong to the group inspired by Great Britain.

Via Hong Kong is a possible route, but not likely. The drawing there is more modern, more towards iconized un-children, and we have no examples of the reverse evolution back to nice drawings.

Notice that the children are taller and more svelte than their counterparts in the UK. It is most obvious on the older panels: perhaps the new drawings reflect a population getting fatter?

Another small difference is that the feet are far apart (see feetnote in Egypt).