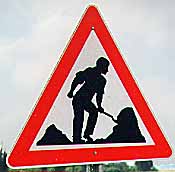 France, 1992
Surprisingly close to our Man from Alençon in France and a man from Ara in northern Spain. We note the pose in general and several similar features : sleeves rolled up, detailed face and shoes.
Some differences though. The smallest heap is a bit higher in Turkey. The men from France are a bit more muscular than the Turkish worker being either at the point of developing a nice spread or being underfed. 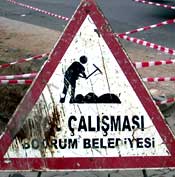 Did I tell you about the blue skies and the warm breeze and the bright sun ? The birds whistling happy tunes ? I told you before: Road signs may bring you the happiest hours in your life (from Start your own collection).

A complete new design : a man using a pick-axe. All other finds feature men working with a spade, a shovel, or their bare hands. Would that mean that a foreman, having both versions in his truck, chooses the warning sign to fit the work at hand ? He probably just takes the one that lies on top. 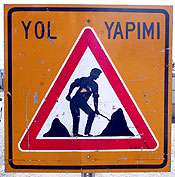 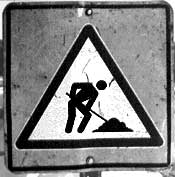 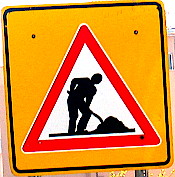 Signs of the Mediterranean Group of Men at Work Signs are rapidly spreading around the Mediterranean Sea, also in Turkey. We recognize the widespread matchstick type and a slightly different version with a stroke for the surface on which the man is busy.

Read more about the Mediterranean Workforce in Slovenia.