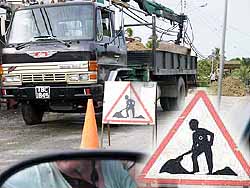 Southern Trinidad, 03.I.2002; pict. C. Broadwell
Since they were discoved by the Europeans, Trinidad and Tobago were fought over by the Spanish, Dutch, French and British from whom they gained independence in 1962.

The present design comes as a real surprise. After such a long British occupation I would expect a UK-design (the man with the wellingtons and umbrella), or, given the American mainland nearby, a new world diamond-shape design (USA or Peru).
But this is very western-European design of a worker surrounded by heaps within a red triangle (e.g. Austria, Belgium). They shouldn't economize too much on the tools though. The shaft of the spade is often clearly not up to the task.

One of them is evolving away from Europe and has deve­loped a nice local appearance. The workman boasts magni­ficent detail: look at his head, the heaps, the shoes, the sand on his spade. But I think that he is still a boy and a bit too young on the job.

A most remarkable development is the triangle with round corners drawn around the man, even when the board already is a triangle with red borders. (One of our children's signs features the same round corners.)
Notice also that the text (included as part of the design, which is unusual) is preferably set in two colours. Which part in which colour is unimportant.
Path: Home / Country List / Men at work in depth / Men at work in Trinidad & Tobago
e-mail:
More signs from Trinidad & Tobago: Children's crossing signs - Falling rock signs